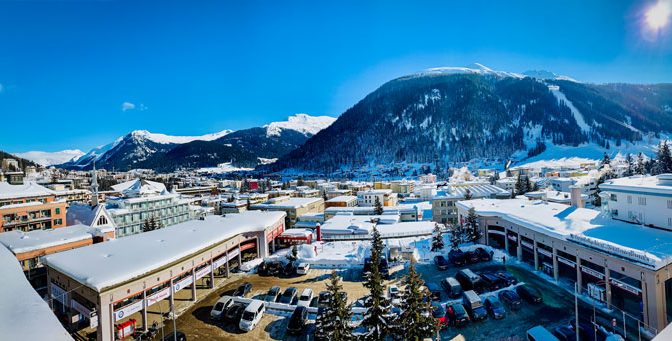 When the world’s leading thinkers, business titans and government officials converge every year in Davos, there’s no shortage of interesting conversation to be found. This past January, however, the conversation had a bit more buzz to it, and the reason: cannabis.

This year, the Canadian Securities Exchange, along with KAPOOR KAPITAL and OTC Markets, co-hosted the first ever pavilion in Davos dedicated to cannabis called Canada Cannabis House. Nestled in the heart of central Davos, Canada Cannabis House brought together cannabis industry leaders from around the world to discuss, debate, and offer insights on how this exciting industry will continue to evolve in 2019 and beyond. 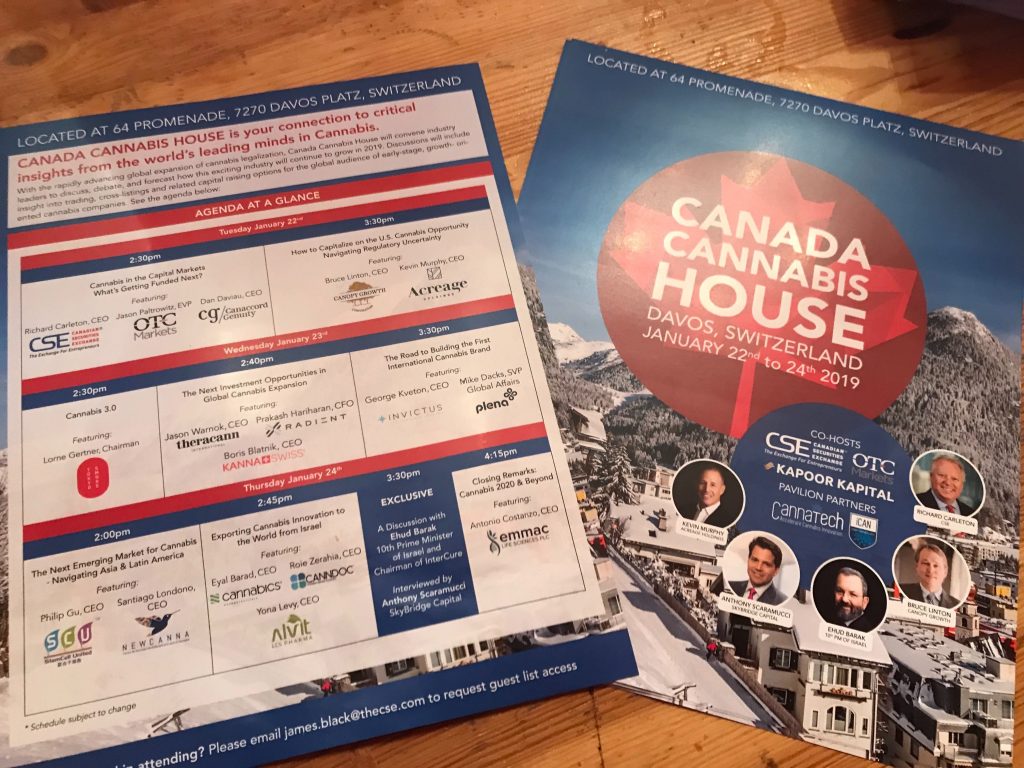 While there is undoubtedly a lot of active discussion taking place about legalized cannabis in Canada and US, coming to Davos also revealed how truly international the interest level is.

“I think I’ve learned, more than anything else, just how global this topic is,” remarked Jason Paltrowitz, Executive Vice President of OTC Markets Group, during a conversation with James Black, the CSE’s Vice President of Listings Development.

An example of one of the many events that generated the most buzz around Canada Cannabis House was Anthony Scaramucci’s interview with Ehud Barak, the former Prime Minister of Israel. Barak, the current Chairman of the Israeli holdings company InterCure, is known for being a proponent of medical cannabis, and is a central figure in discussions currently surrounding that industry in Israel. 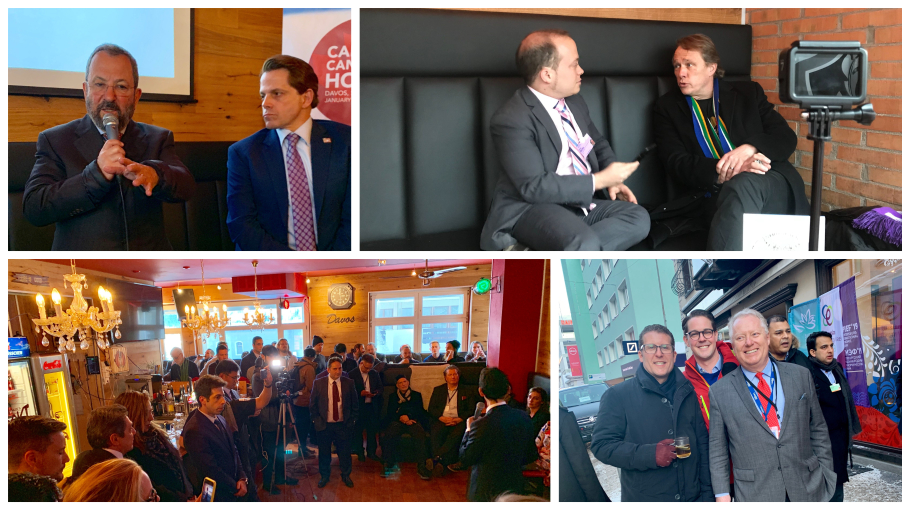 The excitement generated by having a former head of state paving the way towards new cannabis programs in the country he once lead was echoed by the other industry leaders that visited Canada Cannabis House.

The expansion of cannabis to a global scale was another much-discussed topic in Davos.

James Black spoke to Saul Kaye, CEO and Founder of CannaTech, a company that specializes in changing the perception of cannabis in countries around the world about the roadmap for growth. Kaye’s insight into the conversations taking place in Davos was that “we’re here in Davos. We haven’t had this conversation in a forum like Davos before.” 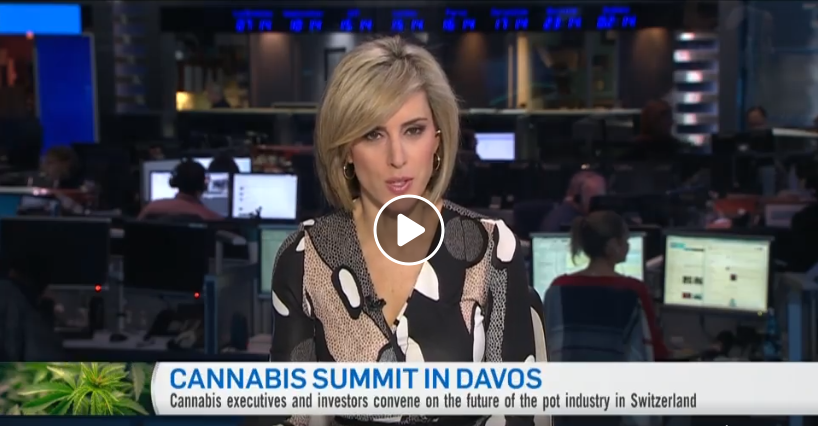 Indeed, taking the cannabis story to the global stage in Davos was a gamble. “There’s still a little bit of stigma attached to the industry,” stated Richard Carleton, CEO of the Canadian Securities Exchange. “I think, I hope, that we can help change some minds.” Even at Davos, there are early signs that stigma and attitudes are starting to thaw, driven in large part by the economic and social benefits cannabis represents.

For example, Carleton recounted that at Davos “We met the Queen of one of the indigenous tribes of the Congo, who wanted to find out about employment opportunities for her people in the cannabis and hemp cultivation space.”

Similarly, Lorne Gertner, Founder and Chairman of Tokyo Smoke, framed the impact of cannabis on the global economy as follows: “We believe that we have the ability to change the economics of countries. We believe that growing cannabis can be the new agriculture, and can help build a sustainable economy, globally. It will be the seed for a new economy.” 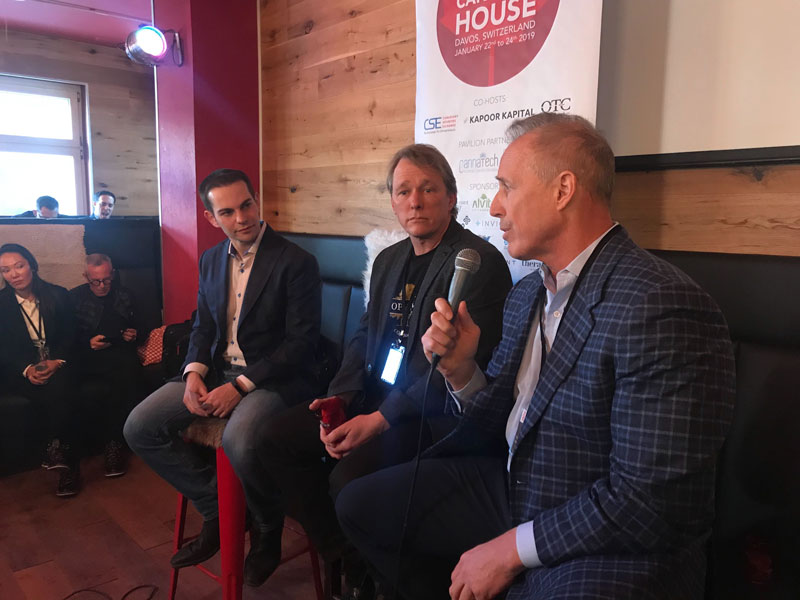 In addition, Kevin Murphy, Founder and CEO of Acreage Holdings, believes that cannabis can have a profound impact on public health tragedies confronting developed economies like the US. Murphy stated that “Our goal is simply to be leading in education and really teaching the people and the legislators of the United States that cannabis has a place, it’s real medicine, and we believe that we can put a substantial dent in the opiate crisis, and that’s really what we’re striving for.”

When it comes to making the most of the entrepreneurial opportunities presented by cannabis, Richard Carleton, CEO of the CSE, believes that Canada is a great example of a success story, one that might inspire other countries that are looking for ways to foster economic growth. He cites this as one of the main reasons for the CSE choosing to participate in Canada Cannabis House at Davos. “We want to showcase Canada’s public market’s ability to fund startup industries. So, if you look at the cannabis space, in less than five years we’ve gone from $0 to more than $60 billion in market capitalization. And that funding was raised from cannabis public markets.”

Given the sentiment of the global community with regards to cannabis, it’s likely that Canada Cannabis House at Davos is just the beginning.