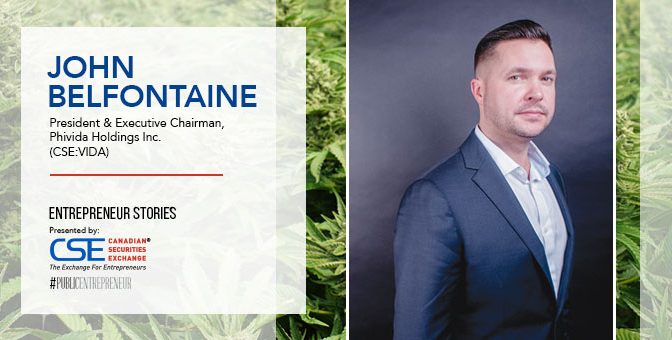 It was insights earned from years of hard work and dedication that led Phivida’s senior management team to choose a greater vision.

Founded in 2014, Phivida has shifted its focus from a pure-play wholesaler of CBD (cannabidiol) hemp-oil extracts into a premium portfolio of CBD-infused clinical and consumer brands, offered in a variety of formats, and formulated to serve the needs of patients, practitioners, professional athletes, and active professionals.

President and Executive Chairman of Phivida Holdings Inc. (CSE: VIDA) John Belfontaine has moved as fast as anyone to take advantage of the growing interest in all things hemp/cannabis, as legalization efforts – and greater acceptance of the plant’s medicinal properties – continue to progress in North America, and around the globe.

Belfontaine, working with key advisors, first saw the opportunity, brought it to the capital markets and quickly found himself fully capitalized, with an all-star line up of experienced executives.

Fast-forward to Q2 2018 and the company has a flush treasury and a newly evolved senior management team with proven success in taking products through regulatory labyrinths – plus a vision to build a CBD brand which appears destined for success.

The Phivida executive team now includes Chief Executive Officer Jim Bailey who, with his team, built the energy drink category in Canada from scratch, taking Red Bull Canada to over $150 million in annual sales. Energy drinks such as Red Bull were not even approved for sale in Canada when Bailey agreed to head the Canadian operations of what is now a household name.  There are clear parallels to his success in that role with the quickly evolving regulatory environment within the global CBD hemp and cannabis industry.

The most recent addition to the executive team is another top Red Bull alumni, former Red Bull USA Director of Sales Doug Campbell. Campbell joined the team in early May in the role of Chief Commercial Officer, now overseeing international distribution and sales.

Clearly, Bailey and his new teammates qualify as star power for a company of virtually any size but for one at Phivida’s growth stage their leadership is truly remarkable.  Their decision to join was based on a clear potential to grow the company into a leading brand in a product category in which they all share a common passion: functional foods, beverages and natural health products infused with CBD from medicinal hemp.

The Phivida product line currently encompasses CBD capsules and tinctures both for consumer and clinical markets, as well an appealing selection of CBD-infused beverage innovations. Phivida’s CBD beverages use encapsulation technologies which make the CBD oils faster acting, longer lasting, and soluble in a fluid format. Perfect for CBD beverages, higher than average consumption rates, and a USA health and wellness market that tends to place a premium on price and convenience.

The company is continuing to innovate on new CBD-infused beverage brands and formulations, and the finer details of its marketing strategy, ahead of a USA roll out.

As a first order from the new chief executive, the creative vision for the future of the brand is now led by award-winning creative agency Sid Lee. This is the same creative agency that assisted Red Bull’s launch in Canada, as well as other notable names in their portfolio, such as North Face and Grey Goose. Phivida has also engaged world-renowned brand designer Brian Schmitt to act as a creative director in the evolution of the brand, with a portfolio of work that includes global brand juggernauts like Nike and Apple.

“The consumer beverage side of the business is what we are really going to focus on,” says Bailey.  “We are going to start with a launch in the United States in four major metropolitan areas: Seattle, Portland, San Francisco and San Diego.  We’ll begin with a targeted approach and then look to broaden distribution nationally.”

Bailey came to believe in the potential of cannabinoid-infused products during his recovery from a cycling accident several years ago.  The hospital that performed his surgery had him on opiates while under its care, but even before being discharged he was looking for natural alternatives.

“I did a lot of research on cannabinoids and their potential for helping with pain management,” Bailey explains. “Knowing Phivida was in the CBD-hemp space really intrigued me.  In food and beverage, distribution and retail are both looking for natural alternatives right now.  People are more aware of what they are putting in their bodies and are seeking healthier choices, so for me this sector is ripe for growth.  I know we have the potential to equal the success we had with Red Bull.”

Both Belfontaine and Campbell share similar stories, and one that many relate to.

Bailey says the only way to beat competitors in the current environment is to “out-market them and out-professionalize them.” He explains regional distributors are forced to operate in somewhat of a wild west environment for the time being, often turning to manufacturers making small batches and selling product on the fly.

“They see that we are very different, the investment we are making in the consumer, and the investment we are making on the creative side,” notes Bailey.  “And working with top quality ingredient suppliers that bring authenticity for each product is important.  Everything we use is premium quality, professionally manufactured, and thoroughly tested for purity, safety and function, putting Phivida in a class above.”

Ensuring reliable supply of high-quality ingredients and at the same time opening a new potential market in Canada is par for the course for Phivida. However, the company’s biggest move to date is one the capital markets have, arguably, yet to fully appreciate.

Phivida’s prospective foray into the Canadian cannabis market is through a joint venture agreement with licensed cannabis producer WeedMD (TSXV:WMD) in what would be a co-owned company called Cannabis Beverages Inc., or “CanBev”.

WeedMD is fast becoming a major cannabis producer under Canada’s ACMPR (Access to Cannabis for Medical Purposes Regulations), with a 26,000 sq. ft. facility operating with annual production capacity of 1,500 kg of high-quality cannabis.

Their second facility has an estimated 33,000 kg of capacity with an option that could take it over 50,000 kg. This 14 acre (609,000 sq. ft.) expansion project in Strathroy Ontario boasts world class genetics, top-tier management and the infrastructure to support large-scale growth, with a low cost of production, by using state-of-the-art greenhouse technologies, yet maintaining premium quality production standards.

WeedMD also recently announced a merger agreement with Hiku Brands (CSE:HIKU) which may add recreational THC brands to the CanBev project, as well as west coast licensed production with their ownership of DOJA, and a national network of retail locations for cannabinoid infused products through their ownership in Tokyo Smoke.

“Our joint venture with WeedMD is designed to build and operate the first ever federally legal cannabis-infused beverage production facility in Canada,” explains Belfontaine.

The CanBev joint venture also enables Phivida to bring their products home to Canada by navigating an important aspect of the Canadian regulatory environment.

“Industrial hemp is not an option for us in Canada,” explains Belfontaine in discussing legal sources for the oil Phivida needs to make its products.  “The WeedMD partnership provides sufficient supply of high-grade CBD from a legal source. We are partnering with an ACMPR licensed producer to source cannabidiol in Canada, and we are thrilled to joint venture with what we consider to be the ideal partner in the Canadian market.

In the US, Phivida products use full spectrum hemp oil extract, with 0% THC, “for all of the health and none of the high,” Belfontaine says. To date, Phivida has focused on the medicinal CBD market and the Phivida brand in Canada will remain true to this ethos.

As a complementary partnership, the WeedMD-Hiku collaboration also opens a whole new market to the CanBev project in the adult-use recreational side of the sector.

“Phivida will maintain CBD-only, THC-free products under our brand labels,” says Belfontaine.  “But with a Red Bull pedigree at the helm, and a solid operations team, we will also be assisting in the manufacturing, marketing and retail distribution of THC products with WeedMD/Hiku under their premium adult-use brands, and labels.”

Looking to ensure every possible base is covered, Phivida has its eye on a launch across North America, while preparing for expansion to new and emerging markets overseas.

“We have secured distribution partnerships across the western United States, as well as in Japan through Asayake,” says Belfontaine, adding that a deal with Namaste Technologies provides exposure to UK, German and Australian markets via online sales.

Phivida has completed two major financings in the past five months, including its long form prospectus IPO in December 2017.  The appreciation in share price out of the gate resulted in the company having almost $7 million worth of warrants exercised. In April, they completed another prospectus offering in bought deal which grossed $8 million.

“As of May, Phivida has just over 60 million shares outstanding with over $16 million in the treasury,” points out Belfontaine. “We now have expert management, a solid structure, tier-one supply and manufacturing partners, and the capital we need to execute our plan. There is now very little standing in the way of the Phivida brand becoming synonymous with leadership in the CBD sector internationally.”