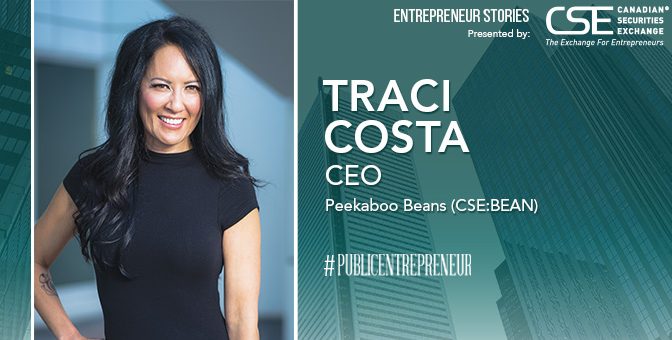 For Traci Costa, Chief Executive Officer of Peekaboo Beans (CSE:BEAN), her childrenswear company began as a labour of love – in her basement with her 2-year-old daughter, Cailin, surrounded by toys.

Fast forward to today? It’s a high-stakes business with a strong sales force of brand ambassadors, also known as “Social Stylists”, and strong growth potential on the back of a shift in retail sales as millennials start to flex their fiscal muscles. Keep in mind, this audience spent US$200 billion last year, relying heavily on social media and influencers.

As a company, Peekaboo Beans has had long-standing power, pivoting in multiple market situations.

“This was about creating a brand through the eyes of a child,” says Costa, adding that when she started the firm in 2006, her goal was to design and create a functional apparel brand that was practical, fashionable and enabled children to live and play in comfort and style.

She saw a gap in the market and felt strongly that there had to be a better alternative to childrenswear that was out there.

Today, the original mission remains the same, however its business opportunity has shifted.

The global children’s apparel industry remains in transition mode; in the US alone, it’s currently estimated to be worth US$31.6 billion, despite excessive discounting and a slowdown in China.

Peekaboo Beans aims to continue to raise the bar: its business opportunity is designed for parents on their own terms and own schedule, which is key for busy parents.

The company has over 600 Social Stylists that offer customers personalized service through personal shopping, or online through social media platforms, such as Facebook and Instagram.

Around 75% of these brand ambassadors are located in western Canada, primarily British Columbia and Alberta, with 20% in eastern Canada, mostly Ontario and the Maritimes.

In addition, the company now has some 2,000 paid members who receive perks like free shipping and preferred pricing for an annual fee of $49.  Many of these “beanaholics” are also involved in marketing efforts through a program that awards points to use for product credit when they refer friends, write reviews, or share Peekaboo Beans photos on social media. Some actually used to fall into the Social Stylists category but transitioned to the new membership program when it was launched in October.

One market that continues to bloom is Peekaboo Beans’ US contingent: around 5% at the moment, but with potential to expand further in the future.

We have grown our Stylist base all across North America, starting in Canada, and are further establishing the brand in 34 states this year,” says Costa.

“Our Stylists are predominantly mothers, working, stay at home, with entrepreneurial aspirations.  They have one to four children, they’re educated, and they make buying decisions that are values-aligned.”

That demographic is key to the new strategy.  According to Fung Global Retail, bricks and mortar retail stores continue to struggle: in 2017, 7,000 stores closed, which is triple the previous year.

It’s a sobering statistic, indeed. But for Costa, it has given her the opportunity to pivot from getting her childrenswear in brick and mortar stores to a model that appears to have more staying power and potential.

Her most challenging time, she said, was in 2008, on the back of the recession when the company was operating as a retail model selling to local boutiques and stores.

Costa decided to steer Peekaboo Beans in a new direction, away from selling in retail stores to a more unified sales force, through a direct sales model.

As successful as that model’s been, Costa is determined to stay on the leading edge of market, technological and demographic change. To keep out in front, Peekaboo Beans recently transitioned the direct sales platform to an omni-channel approach, one that engages sellers through social platforms, including Instagram and Facebook, as well as other retail channels to maximize revenue and build brand loyalty.

“We’re moving it into a social selling platform where we can leverage technology and grow through an influencer base, social media and blogging — similar to an affiliate model,” says Costa.

Costa says the company is focused on growth on all levels, with a particular emphasis on expanding the US segment of its business, alongside launching an Amazon store very soon.  Temporary “pop up” shops have also proven to be successful.

With increased operational efficiencies, better margins and a new recurring revenue model, “we expect to see profitability within the next 12 months with this new platform,” says Costa, adding she hopes to add another 500 affiliates in the United States this year.

The US expansion plan will use a multi-faceted approach and the list of to-do’s is long: creating an e-commerce and wholesale strategy with a focus on certain markets, continuing to develop its social media strategy, attending more industry events, and increasing content with social media influencers.

“We’re building a social impact movement with the people that sell our product,” says Costa, adding that the company places a focus on partnering with manufacturers who have standards that align with its values: no harmful chemicals and toxins.

The year 2019 stands to be a good one for the company, as it will continue to transition from a direct sales model to a social retail platform.

“This model will allow our Social Stylists to shop, save and earn commission through sharing the brand on social media,” says Costa.

For now, Costa continues to push Peekaboo Beans’ forward with her goal to establish the company as an industry leader and category king in children’s apparel.

This story was originally published at proactiveinvestors.com on January 2, 2019 and featured in the Public Entrepreneur magazine.