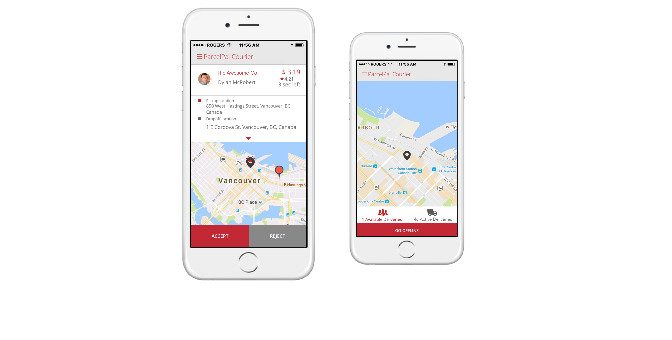 This story was originally published at www.proactiveinvestors.com on Sep 6, 2016 and featured in The CSE Quarterly.

“I want it and I want it now.” So the pundits say is the mindset of millennials, a generation that has grown up amid instant access to information and unprecedented awareness of other peoples’ lifestyles. Businesses, for their part, have long been this way, as some processes simply cannot move forward without the availability of certain items or documents.

Vancouver-based ParcelPal Technology Inc. (CSE:PKG) is counting on these dynamics, looking to provide on-demand (within 1 hour) and same-day delivery in local markets that beats the likes of Canada Post, FedEx and local carriers hands down. The prize is a portion of what the company claims is a market in which billions of dollars are spent each year getting items from one location to another.

The ParcelPal platform is a user-friendly marriage of software and logistics. When a customer wants something delivered they enter the details via computer or mobile device and a courier registered with ParcelPal is alerted to the request. Much like the famed Uber system for local transportation, couriers are rated by customers, and the higher your rank the more likely you are to receive the initial alert.

ParcelPal has aimed its sights on the B2B and B2C markets to begin, focusing on both e-commerce websites and storefronts. “Currently, the delivery process is full of paperwork, phone calls and waybills,” says Jason Moreau, ParcelPal’s Chief Executive Officer. “It is ripe for automation, and by utilizing smartphone and GPS technology we have been able to automate the courier request and engineer a standard of delivery I think people will be very impressed with. Our software is scalable and we can launch in new cities quite quickly.”

Once a courier accepts a delivery request, wheels are set in motion both literally and figuratively. The courier travels immediately to the pickup point and takes possession of the package. As the courier makes his way to the destination, GPS technology is used to monitor progress. No more sitting at home all afternoon waiting for something to arrive – the customers on each end of the transaction can see precisely what is happening so they can make any related decisions accordingly.

The cost is reasonable, at $3.99 within a 4km radius for same-day delivery and $6.99 within that same radius for 1-hour service. Charges on top of the base rate are added for deliveries of more than 4km or for packages weighing more than 25kg.

Of the fee, 80% goes to the courier and 20% to ParcelPal. ParcelPal has also implemented an insurance program whereby customers can select to insure their items for up to $1,000. The company gets 100% of the insurance revenue.

Vice President of Operations Kelly Abbott explains that ParcelPal currently has some 1,600 couriers registered to deliver its packages, each of whom has undergone a screening process and training session to ensure they represent the company professionally.

“Potential couriers come in and meet us and we do a background check and an in-depth training session,” says Abbott. “We have them do a single delivery, then we show them how the application works and how to handle various delivery scenarios. Delivery standards are our main concern, so if anything goes wrong, such as if a courier is on time for pickup but takes forever to drop the parcel off, his rating will turn negative and he will automatically be removed from the system.”

Also reflecting the Uber model, couriers have the opportunity to rate customers. In this way, automation introduces efficiency but accountability is maintained through detailed monitoring of operations and real-time rating of the system’s various human components.

In the first quarter of this year, ParcelPal conducted a six-week beta launch during which it delivered over 200 packages in Vancouver and the surrounding area, its couriers traveling over 5,000km in total. The launch went “very well” according to Moreau.

In the near term, the team is continuing with its soft launch in Vancouver, slowly building the local user base and working out any kinks in the system before heading nationwide, likely in the first half of 2017. “We are receiving inquiries from Toronto and Calgary saying ‘when are you going to be here,’ but we have to make sure it is perfect first,” says Moreau. “Right now Canada is pretty much a land-grab, as anyone with a similar model is focusing on big hubs in the United States.”

Moreau says that one of the verticals envisioned is integration of the ParcelPal platform with online e-commerce websites. “What that means is a company selling shoes, or virtually any product, in a given city can integrate with ParcelPal and during the online check-out process ask how the buyer wants their goods delivered. Do you want it on-demand, same-day, or do you want it through a traditional courier that might take days? ParcelPal would handle the same day and on-demand scenarios.”

Moreau and Abbott realize that ParcelPal will have to cement its reputation before big retailers agree to feature it as a delivery option on their websites. But for smaller retailers for whom such a service could be an immediate boon to business, the API (coder lingo for the ParcelPal computer program a retailer would hook up to its system) and Shopify plug-in are available for download.

Lest anyone conclude that ParcelPal can establish itself as a household name overnight, Moreau is quick to point to the growth curve experienced by Postmates, a local delivery service based in San Francisco that was established in 2011. “It took them about five months to do their first 1,000 deliveries,” explains Moreau. A graph distributed by Postmates founder Bastian Lehmann showed it taking 116 weeks to reach 500,000 deliveries, but then only another 20 weeks to reach 1 million.

All things considered, ParcelPal seems off to a good start, with business in the first half of 2016 having moved forward according to schedule. The company recently ran an online advertising campaign which further convinced management that demand for speedy delivery is out there waiting to be met, particularly among consumers.

“We did an online ad campaign as an experiment of sorts, comparing business shipping versus consumer,” explains Abbott. “We got a little traction on the business side, but on the consumer side we got over 8,500 visits over the course of a month. It was basically an ad asking if the viewer was interested in having food, shoes or clothing delivered right to them.”

Consumer scenarios are limited in number only by one’s imagination, but a busy person needing a particular article of clothing for a function or a group wanting to order food from a restaurant are ones to which ParcelPal is perfectly suited. ParcelPal is planning to launch its consumer app early in the fall.

“Consumers will have the ability to order whatever they wish,” says Abbott. “We’ve created an on-demand marketplace right in your pocket, whether you want your lunch delivered, or you want our drivers to pick up your dry cleaning, it will be possible to have it at your door within an hour.”

For the second half of the year “we anticipate full launch of our consumer app and doing a large campaign in Vancouver,” says Moreau. “Once we are sure it is perfect then we’re going across Canada. We are a nimble young company building out some spectacular technology, and when the consumer app comes out in the fall that is where it begins to get really exciting.”

Learn more about ParcelPal Technology Inc. at https://www.parcelpal.com/ and on the CSE website at http://thecse.com/en/listings/technology/parcelpal-technology-inc