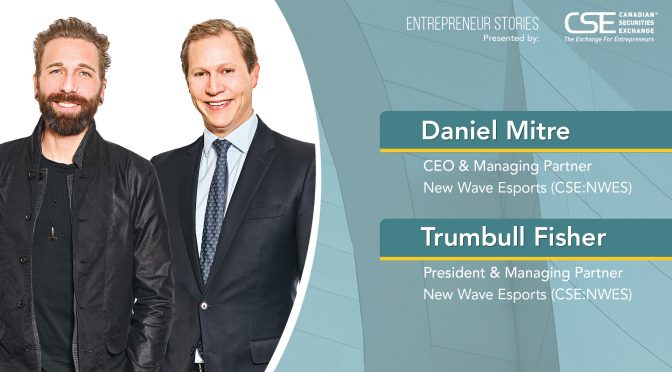 Esports in North America is undergoing a metamorphosis. Video games like Fortnite and Overwatch have taken the world by storm, viewership at tournaments is bigger than ever and capital is flowing into the industry from sources that had never considered it before.

New Wave Esports (CSE:NWES) provides the spark for organizations looking for oxygen in the space, whether it’s esports teams, platforms, tournament organizers or technology innovators. If you have a great moneymaking idea in this industry, New Wave Esports is the type of company you turn to for the capital to make your dream a reality.

And it has not taken long for the company’s investments to begin paying off. In July, Lazarus Esports, a competitive team in which New Wave owns a minority stake, took home US$3.5 million at the Fortnite World Cup.

At the helm is Chief Executive Officer Daniel Mitre, who perfectly fits the profile of an esports CEO. He’s fresh-faced – young enough to have spent his whole life growing up around video games, but old enough to remember carrying a roll of quarters to the arcade. With a beard, gauges in his ears and a sleeve of tattoos down each arm, he looks the part.

New Wave Esports went public in October and Public Entrepreneur caught up with Mitre in the midst of a road show to talk about where his company, and the industry as a whole, goes from here.

Tell me about your background in the gaming industry and how New Wave Esports came to be.

I’ve been in gaming for over 17 years. I started off testing video games way back in the early 2000s, where I learned the fundamentals of game development and gained an understanding of what motivates players to keep coming back.

The past five years I’ve been at EA, and I got to work on the Battlefield franchise, as well as some other competitive titles like FIFA, Madden, NBA Live, and Need for Speed. And esports has always been a common thread in the sustain/retention models of those games, so I’m able to bring my gaming network and my expertise to New Wave Esports.

Then, I met with Trumbull Fisher. He’s a 15-year finance industry expert who’s raised capital across Canada for industries like cannabis and mining, and he brings capital markets experience as New Wave Esports’ president. Between my gaming and his finance, we bring the investment vehicle that is New Wave Esports.

How does your investment process work?

We set up the company in two pillars, the first of which is the acquisition arm. We’re looking for companies that we can fold into the New Wave Esports family. They benefit from the performance of our shares as well as the ancillary services we provide, and their revenues are directly turned into our revenues.

The second pillar is the traditional holdings arm. We’ve built a phenomenal portfolio of minority investments, and as we go forward, I expect to see a shift in our investment approach toward majority stake investment.

We‘re unlike a traditional investment group that just puts in a bunch of money and checks in every quarter. We place investment capital and take stock options in companies, and we sweeten the deal with financial advisory services and new revenue streams.

We facilitate new sponsorships for teams and collaborations with big franchises like Fortnite or Battlefield, as examples, and that’s where teams thrive.

What do you look for when considering a potential investment?

We look at the esports industry in four verticals. The first one is teams and organizations – that’s Lazarus.

We also look at tournament organizers, whether an event is in your local hometown or a big arena – that’s Even Matchup Gaming.

The third is platforms and networks. This is anywhere gamers congregate online, such as online tournaments or an esports gambling platform – that’s PlayLine.

Fourthly, we target technology and tools, which is really the backbone of the industry. A lot of this is behind the scenes, including data insight and business intelligence for esports companies to better know their audience or build a better experience for gamers coming in – that’s Thunderbolt CDG.

We look at the esports industry as an ecosystem. First and foremost, we look for ethical teams that share the same vision as us. Secondly, we ask if these companies are led by executives that have run businesses before, and if not, how we can help. Thirdly, we consider whether these companies are positioned to thrive in a space that may be saturated or may not have any competition.

Speaking of Lazarus, congratulations are in order after the team won $3.5 million at the Fortnite World Cup this summer. What was your involvement there?

Lazarus is owned and operated by an organization called Tiidal. We came in and invested a sizeable chunk into Lazarus in March.

Not many people knew about Lazarus before the Fortnite World Cup, but the tournament came around and Lazarus took second in the duos and fourth in the singles, which led to that $3.5 million revenue into Tiidal. That put Lazarus on the map as one of the highest grossing esports teams in the world.

I was at the airport and I got a call from one of our advisors who said, “Dude, Lazarus just took home $3.5 million! Their athletes are like rock stars now!” I love calls like that.

Why did you decide to take New Wave Esports public?

We see the public vehicle as an opportunity for the esports community as well as other investors and brokers to invest in the industry. We are the first esports investment company to be traded publicly on the Canadian Securities Exchange, and we wear that with a badge of pride.

We went live on October 28, and so far it has been phenomenal. This generates exposure for us and opens up new opportunities worldwide. Not only are we listed on the CSE, but we also just listed on the Frankfurt Stock Exchange in Germany, where we know esports is massive.

How do you see esports evolving in North America?

The esports industry is still very much growing in North America. Asia is 20 years ahead of us, so we look to them as an opportunity to replicate those tried and true models. That’s why we opened up the New Wave Esports Asia department.

But with North America as an economic stronghold, everyone’s looking to see what we do to push esports forward. You’ve got celebrities like Will Smith putting sizeable money into a team called Gen G, and Drake took an ownership stake in gaming group 100 Thieves.

It’s just starting in North America, so the revenue multipliers have yet to hit. So, if you’re at the ground level, you’ll see that coming through.

Look, gaming has been around for 40 years, and it’s always been entertaining to watch someone play who’s better than us. I remember swarms of people at arcades watching someone play Street Fighter, and that’s why Twitch exists today.

As a video game player, how does it feel to be running your own esports company?

If you were going to tell 15-year-old Dan that he would have a career built on video games and ultimately become the CEO of an esports company, he’d be saying, “Get out of here, that’s insane.”

Back in the 90s, video games were still kind of for nerds. You didn’t have Internet connectivity, a mass audience and mobile games that make gaming accessible to everybody.

It’s phenomenal to see gaming grow, and it has created a community that I absolutely identify with. I’ve been able to build a sustainable life from it, and this is an opportunity for me as a CEO to grow the video game industry.