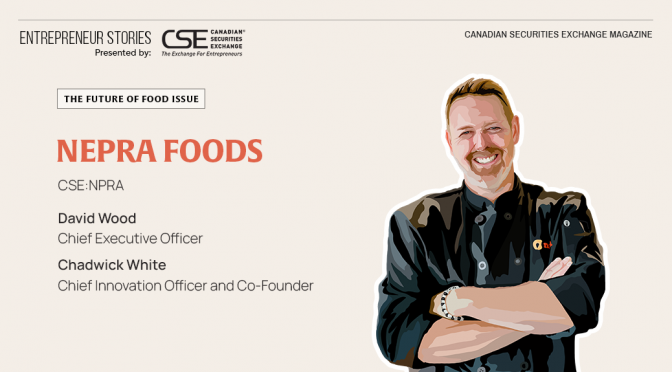 Nepra Foods (CSE:NPRA) went public in September 2021 in an oversubscribed $7.5 million IPO that underlined the interest in plant-based meat, a market which, according to Bloomberg Intelligence, could top US$162 billion in size by 2030. The company has its roots in the gluten-free ingredients sector and is led by food industry veteran David Wood, whose grandfather started a butchers’ supply business in the 1930s.

Wood and partner Chadwick White, a master baker and now Chief Innovation Officer and Co-Founder of Nepra, were involved in the success of Udi’s Gluten Free Foods and Gluten Free Baking Solutions.

Nepra was born from a desire to create a consumer brand business using the company’s own innovative formulations. Today, it is a vertically integrated group, producing and selling multiple products across four segments: proteins, dairy alternatives, baked snacks, and spreads and ingredients. Sales in the nine months to September 30, 2021, totaled C$4.26 million, up from $1.75 million in the year-earlier period. Canadian Securities Exchange Magazine spoke to Wood, the company’s Chief Executive Officer, to find out what he anticipates the next phase of the Nepra story will look like.

Why do you think there is such a big move toward healthy foods and plant-based meat alternatives?

I think people have different reasons. Obviously, the environment is one big one. A lot of people want to do whatever they can and raising animals in the way we do is not the best for the environment. I also think the pandemic has brought on people’s concern about their personal health and they realize that what they eat is instrumental to how they feel. When people go plant-based, most of them don’t go fully vegetarian or vegan. They just eat more plants and less meat, and I think when they do they find out that they feel better. Their immune system response is better and their digestive systems work a bit better. And then there’s the animal cruelty side that a lot of people are concerned about, and just how we treat animals in general.

Tell us more about your proprietary THP (textured hemp protein). What is it? How did you get into it? Why is it such a game-changer?

When you make a meat alternative, you’re taking the protein from the plant and you have to texturize it to give it a similar texture to an animal product. Mostly it’s done with soy. But now they are texturizing all sorts of things – pea and chickpea and fava bean. But we are texturizing hemp, and as far as we know we’re the only ones currently doing that and we’re having really good luck.

The biggest advantage is the flavour. Soy has an off flavour so you’ve got to cover that up when you make products out of it, and you end up using a lot of salt and other ingredients. Hemp has a very mild flavour. When we texturize it, the base product actually has a turkey flavour so it’s much easier to formulate meat analogues out of. Soy has some negative health aspects to it, too.

The reason we got into hemp is that our historical business is ingredients in the gluten-free space, so when you take gluten out of a product you have to replace it with something. And that’s how we came across working with hemp and found out that it’s very functional. Not only does it have good flavour, it’s functional when you bake with it or make food products out of it. It has a similar structural quality to eggs. You can take hemp protein and whip it into a meringue, so this really gives us an advantage on the food development side to come up with new products. As we started playing with it more, we found that not only could we use it for baking, but we could also make a lot of other products out of it.

Meat analogues are only one category. New products we’re coming out with include spaghetti and meatballs, a frozen food line and a pasta line. The spaghetti is actually made out of hemp as well because it’s high in protein, high in fibre and very healthy. So, as people eat more plant-based diets, they’ve got to come up with good protein sources. And they don’t necessarily want to eat things that look like meat. We’ve got formulations like pasta that is a good source of protein, or we also came out with snack items like pretzels.

You raised $7.5 million in your IPO. How are you going to use these funds to grow the business?

The company was founded in 2016 and our core business is ingredients. We import and distribute ingredients to all kinds of manufacturers across North America. We’re growing that business and because supply chains are a problem, especially when you’re bringing products in from overseas, we’ve used some of that capital to increase inventory, just so we can weather some of the shipping delays.

We’re also building out our facility in Colorado to produce more of the textured hemp protein and more of our high-protein flour. We’re currently selling hemp flour that is used in baking and that’s about a 55% protein content. And we’re putting in a pilot production line so we can produce the ProPasta meals here in our facility in Colorado to a point. When we really get into big distribution, then we’ll go to a co-manufacturer that has larger lines that can build the ProPasta meals. We’ve also hired a lot of staff. We’ve had to bring on quality control people and commercialization people. So that’s been some of the spend as well.

What other news should investors expect in the short to medium term?

We’ve announced the launch of our ProPasta line. Our big retail push is going to be in March, when there’s a big trade show in the US that is the place to bring your products to market and get in front of all the retailers.

Then we’ve got some new meat alternative products we’re working on. We’re finishing the purchase of the equipment for that. We will have some products coming out probably toward the middle of next year.

The other thing we’re working on is the egg replacement capability that hemp has. In the food industry, when big food companies use eggs, they usually don’t use liquid eggs, they use egg powder and normally egg white powder. But because it’s an allergen and because it’s an animal product, a lot of food manufacturers want to get rid of it. We’ve developed an egg white powder replacement using hemp that will sell commercially. We use it in our own products, but we’ll also sell it. That’s going to be a game-changer because it will be a unique product. There are very few plant proteins that can mimic eggs so this is going to be a big item for us on the B2B side.

What would you say to investors looking at this space? What makes Nepra Foods stand out?

You look for innovation, you look for companies that are meeting the needs of consumers, and consumers are looking for nutrition and taste and texture. A lot of the plant protein companies are using old ingredients – soy or gluten. It’s not very innovative. I think a lot of companies, too, if you look at small public companies, don’t have revenue, or have very low revenue. We are not a new company. We’ve been around for years and we’ve got existing revenue and we’ve got multiple revenue streams because we sell ingredients B2B. And then we also have our own consumer side. I think it really gives us a leg up for success in the future.