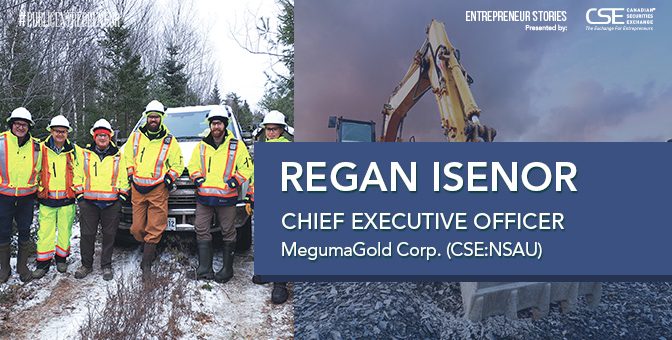 The province of Nova Scotia already has a rich gold mining heritage, but new theories and modern exploration technologies are re-awakening interest in the jurisdiction’s huge potential.

It was the site of one of Canada’s first gold camps and production of the metal dates back to around the middle of the nineteenth century.

Between 1862 and 1927 almost a million ounces of the precious metal were extracted from the province.

In those early days, however, the focus was on high-grade, narrow vein deposits. Today, the emphasis has shifted with the discovery of disseminated mineralization with bulk-mineable potential.

The move started with the discovery of shales at the Touquoy deposit, where a company called Atlantic Gold has now commissioned a highly successful open pit mine.

Now another firm – explorer MegumaGold Corp. (CSE:NSAU), which takes its name from the Meguma Terrane where the original gold rush took place – is getting in on the act. It has acquired 11,205 claims totaling more than 170,000 hectares, many of which are adjacent and along trend from the Touquoy deposit.

Meguma’s chief executive officer, Regan Isenor, explains, “Typically in Nova Scotia, everyone was always after the high-grade nuggety style quartz-hosted gold, which is quite expensive to extract and it’s hard to build models off of that type of mineralization. Atlantic Gold, here in the province, has shown that the disseminated model of low-grade, bulk tonnage is really where the projects that are economically viable are going to be found.”

Without getting too technical, the reason for the geology is this: glaciation in Nova Scotia caused the softer rock on the top to erode, exposing the harder outcrops, which excited those early explorers because the gold was often visible in the quartz veining exposed at surface.

Disseminated mineralization, on the other hand, often cannot be seen and is scattered across large areas at a lower grade but could potentially exist throughout the massive anticline structures within the Meguma Terrane.

Although such mineralization can’t be seen, exploitation of the gold is simple and cheap – simply digging the source rocks out of the ground from an open pit, while cheap processing methods can also be used.

Although the company doesn’t plan to put a deposit into production itself, Meguma wants to emulate the success of its neighbor Atlantic Gold.

The latter’s Moose River Consolidated gold mine has the lowest all-in sustaining cost per ounce mine in the world – between US$540 and US$588 – mainly due to the low strip ratio.

Meguma is currently in the middle of a 20,000 meter reverse circulation (RC) drill program focused on 10 highlight targets, whittled down from an original 40, which were identified from a major airborne geophysical and Lidar survey.

Isenor highlights that the company’s targets are predominantly on ground that has “never been tested before,” which is exciting as he believes disseminated gold could be present throughout the province.

He aims to have completed 10,000 meters of drilling by mid-summer, before stopping to have assays returned for evaluation ahead of a larger program, consisting of diamond drilling to focus in on the most exciting targets and RC rigs for more regional exploration.

With enough money in the bank to fully finance the current drill program, specifically around $5.5 million, Meguma hopes to succeed in Nova Scotia where others have had to throw in the towel before.

“People have come in and they’ve had an idea of what a particular model could look like, but they haven’t been funded well enough to actually really test these targets and that’s what we are doing,” says Isenor. “We are really aggressively drilling them.  If it’s there we are going to find it.”

MegumaGold was previously called Coronet Metals and was run out of Vancouver by mining executive Theo Van der Linde, with a tailings project in Nevada.

He became aware of the Meguma land package and could see the opportunity. Coronet struck a deal to buy a large land package in the historic gold district and Isenor was brought in as the CEO when the company name changed last June.

The operations base was also moved to Bedford in Nova Scotia and the firm started to raise capital for exploration.

Van der Linde remains as president at the company.

Despite its early stage, MegumaGold has big goals as it looks to play a major part in Nova Scotia’s paradigm shift in the understanding and potential of its gold deposits.

Isenor reckons his company stands at the exciting beginning phases of people understanding that this disseminated style of mineralization is really where the future lies and is the economic mining model for Nova Scotia.

“People never really evaluated any of these targets for this disseminated style,” he explains, adding that often such geology was considered by miners to be mere waste rock.  New theories indeed.

This story was originally published at www.proactiveinvestors.com on March 8, 2019 and featured in the Public Entrepreneur magazine.