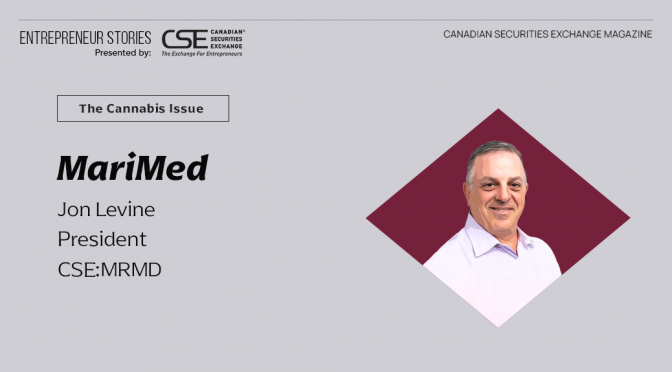 Consumer demand for legal cannabis continues to grow in the US despite stalled legalization efforts at the federal level. Analytics company New Frontier Data, for example, projects US cannabis sales will hit US$57 billion annually by 2030, with that number possibly reaching $72 billion if 18 additional states permit adult recreational use.

MariMed (CSE:MRMD) has developed into a premier seed-to-consumer multi-state operator with expertise in cultivation, production and dispensary operations. The company has a track record of sustainable revenue growth along with one of the strongest EBITDA margins in the industry, projecting $135 million to $140 million in revenue for 2022, as well as $35 million to $40 million in adjusted EBITDA.

The Canadian Securities Exchange Magazine recently spoke with MariMed President Jon Levine, who discussed the company’s growth prospects, how it plans to increase shareholder value and the ways in which US federal legalization efforts influence MariMed’s business.

What distinguishes MariMed from other US multi-state operators?

MariMed is a company that prides itself on its history and a leadership team with a strong track record of winning licences. We built this company over several years – first as advisors helping businesses win their applications and building out their facilities, and now as acquirers working to consolidate those businesses under the MariMed footprint.

Today, we have a lot of team members and facilities with deep industry knowledge, including several members of our executive leadership team. Our CEO Bob Fireman, COO Tim Shaw and I have been working together in this industry for more than a decade.

Why did you choose the states in which you operate, and do you have plans to expand to other states?

In the beginning, MariMed submitted applications in multiple states that were available for licensing and focused on getting those states up and running. Now that MariMed has consolidated the businesses in Illinois, Massachusetts and Maryland, we are focused on expanding to the maximum allowable by law in each of those states.

In Massachusetts, for example, we plan to add two more adult-use dispensaries to our fully vertical, seed-to-sale operation there. In Illinois, we recently added a cultivation-and-processing licence that, once operational, will make us fully vertical in that high-growth state, and we also acquired a licence to build a fifth adult-use dispensary. Illinois allows operators to own and operate a maximum of 10 dispensaries, so we are also focused on adding an additional five to maximize our retail operations in that state.

Additionally, we’re looking for other markets we can expand into that have limited licences and are within the larger regions we presently operate in. We can go in and do the same build out where we go fully vertical as quickly as possible.

What are MariMed’s plans to enhance shareholder value?

We have an exciting future ahead of us. As I mentioned, we’re building out Illinois, Massachusetts and Maryland with additional locations. We’ve also recently won licences in Ohio and Connecticut.

We’re also going to continue to expand into additional states through either acquisitions or through the licensing process. Then we’ll build them to be as fully vertical as quickly as possible.

We’re also going to expand our branded products, including Betty’s Eddies, Kalm Fusion, Bubby’s Baked and Vibations: High + Energy, which have all been very successful in each of the states in which they are presently distributed. We’re going to make them bigger and stronger, as well as expand them into additional states over the next several years.

How do you intend to finance your growth plans?

We’re presently cash-flow positive and generating additional cash every month. So, we’ve been using cash flow from operations to expand at a slower rate. But with the current down market making equity issuance not the best option for shareholders, there are opportunities to borrow non-dilutive money at attractive rates given our financial strength and clean balance sheet.

What impact, if any, has the government’s inability to introduce federal cannabis legalization had on your business?

It’s a disappointment for MariMed because we would like to see some form of the SAFE Banking Act passed. That’s less important for our company, as our strong management team has learned how to operate within these tough confines of borrowing and banking abilities for over a decade. The SAFE Banking Act is really about helping smaller cannabis entrepreneurs that are more challenged in gaining fair and equitable access to capital.

We would love to see the SAFE Banking Act passed, and with the right amount of social equity reform included in it. But even with the continued delays at the federal level, MariMed can still operate efficiently and successfully. We’re going full steam ahead in building additional opportunities for our investors.

Finally, what do your shareholders have to look forward to in the next 12 months?

Our investors should expect continued success and growth. Over the next 12 months, we will open additional retail and cultivation facilities, generating more revenue, and increasing the number of consumers that can access our great brands. We’ve been very successful over the last few years, and we’re going to continue that trend.

Our shareholders should expect MariMed to have a strong balance sheet with the ability to expand our cash flow and to borrow money at reasonable rates to accelerate the expansion of our business to get to the next level. We may be considered a small MSO, but we are going to become much bigger.

In this market, we have a wonderful opportunity to continue to grow. I think our shareholders will benefit from patience and expect that we will continue to grow over the next several years.

Learn more about MariMed at marimedinc.com.