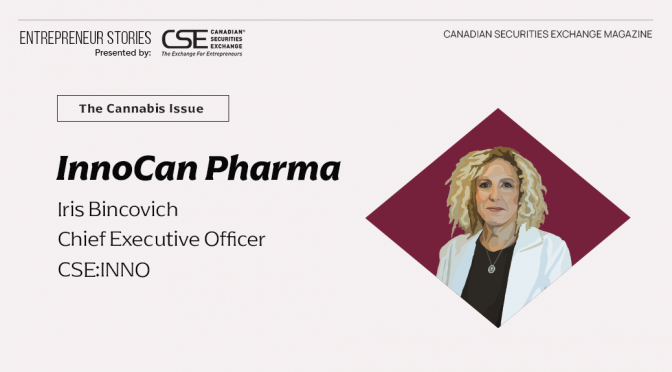 Smart drug delivery systems that deliver medications to specific sites in the human body are on the leading edge of science.

This type of biomedical engineering focuses on maximizing drug efficiency and minimizing possible side effects, while reducing the overall amount of medication used and frequency of treatment.

Cannabinoids play a crucial role in regulating the immune system and have been shown to suppress inflammation through multiple anti-inflammatory pathways. Their high safety profile makes them an appealing alternative to many traditional drugs, according to Iris Bincovich, Chief Executive Officer of InnoCan Pharma (CSE:INNO).

InnoCan is working to harness the unique qualities of cannabinoids and combine them with the latest in drug delivery systems. The goal is to deliver cannabinoids such as CBD so that more of it becomes available for the body to benefit from than with current platforms.

Bincovich recently spoke with Canadian Securities Exchange Magazine about working with university researchers on the combination of cannabinoids and innovative delivery systems, as well as the direction in which the company’s technologies are heading.

InnoCan recently reported the results of preclinical trials on dogs, using injections for both pain relief from osteoarthritis and for the treatment of epilepsy. What did you learn from these trials?

We learned that we can bring a substantially better bioavailability of CBD to the bloodstream.

The low oral bioavailability of CBD in people, at 6.5% to 20% of administered dosage, is a result of first pass metabolism in the liver and considered to be variable and dependent on fasting and fed conditions.

Together with The Hebrew University of Jerusalem, we’re developing injectable liposomal CBD formulations (LPT) that have already shown higher bioavailability of CBD and prolonged release to the bloodstream.

In a recent study, we’ve learned that the LPT showed close to 100% bioavailability of CBD and prolonged release for at least four weeks after one LPT subcutaneous injection.

In this preclinical trial, a dog with drug-resistant epilepsy was treated with InnoCan Pharma’s LPT injections. The results demonstrated that the frequency and intensity of the dog’s epileptic seizures decreased significantly. Since the last LPT injection, the dog has not had a seizure for over 10 weeks.

In another preclinical trial, six dogs suffering from osteoarthritis and treated with oral analgesics, but still experiencing pain, were administered a single LPT subcutaneous injection in addition to their routine analgesics. CBD concentrations were observed for six weeks following the liposomal CBD injection in the dogs’ plasma. Owners reported that the dogs’ pain and wellbeing scores improved for several weeks after the injection. The results show that the LPT technology has the potential to provide additional analgesia in dogs suffering from pain.

You’re starting by treating dogs for these conditions, and eventually moving on to the human side?

We’re gathering data for this purpose. We chose a big animal model for developing a drug and a treatment model. And yes, the veterinary industry is a potential market whereas the regulatory barriers are marked for the human pharma side.

In both pathways, veterinary and human, we see a lot of potential for the LPT technology to improve patients’ quality of life.

CBD-loaded exosomes (CLX) may hold the potential to regenerate cells. Could this work for conditions associated with the central nervous system?

Exosomes are small particles created when stem cells are multiplied. Lately, they are considered a very promising delivery platform for different molecules. The exosomes can be used as a delivery vehicle that can deliver cannabinoids to diverse target sites in the body.

We’re collaborating with Ramot at Tel Aviv University to develop a revolutionary cannabinoid-loaded exosome technology that may hold the potential to provide a highly synergistic therapeutic effect. This effect utilizes the regenerative and anti-inflammatory properties of exosomes and cannabinoids to target various conditions associated with the central nervous system.

The LPT platform development is now in the stage of collecting more safety and efficacy information, with a view toward human clinical trials.

From Q4 2022 going into 2023, we will commence targeting pharma veterinary companies, especially in the companion animal arena for pain management and epilepsy drugs, to initiate negotiation of licensing agreements.

In the three years since we went public, we’ve done an early exercise of warrants. Nearly 90% of our investors chose to exercise the warrants for total proceeds of C$9.2 million. We’re collaborating with leading scientific institutes, focusing on the development of the LPT and CLX drug delivery systems, to achieve our goals of presenting the market with more efficient and accurate delivery systems of cannabinoids to the body.