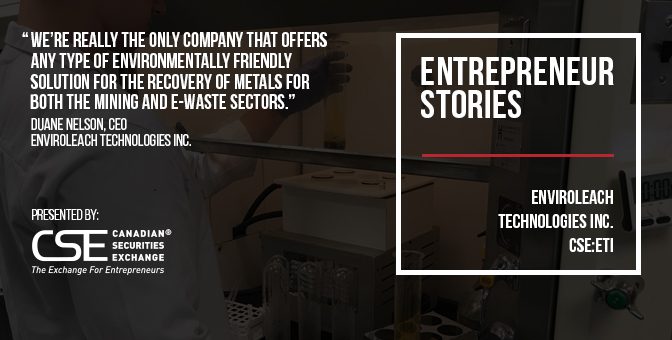 EnviroLeach Technologies (CSE:ETI) is shaking up the mining industry by offering an environmentally friendly alternative to widely used toxic methods of extracting gold from ores and electronic waste.

Many miners rely on cyanide and acid based leaching to recover precious metals from ores, concentrates and electronic waste. More than 76% of all gold is produced via hydrometallurgical extraction that utilizes cyanide.

While cyanide is an effective extraction medium due to its high gold recoveries and low cost, it is also potentially deadly to humans as well as fish, birds and other wildlife if used incorrectly.

EnviroLeach is trying to change this by producing a non-cyanide, non-acid based formula that is not only eco-friendly but actually contains food-grade additives that are fit for human consumption as nutritional supplements and medicines, including the treatment of some cancers.

Chief Executive Officer Duane Nelson says the formula is mixed with tap water so you can “effectively drink it” before the solution is chemically altered using electrical currents passing through diamond based electrodes supplied by De Beers.

“We’re really the only company that offers any type of environmentally friendly solution for the recovery of metals for both the mining and e-waste sectors,” Nelson says.

EnviroLeach has proven in recent tests that along with being better for the environment, its formula is also just as effective as cyanide leaching for ores and concentrates, and hot acid solutions for e-waste.

During seven months of extensive hydrometallurgical tests of its formula on electronic waste, the company achieved gold recoveries of over 90% in periods of less than two hours.

Electronic waste, or e-waste, includes devices such as mobile phones, TVs and computer components that are thought to contain as much as 7% of the world’s gold.

EnviroLeach found that when it tested its formula on e-waste – specifically printed circuit board assemblies (PCBA) used in electronic devices – it provided similar leach kinetics to conventional acid based extraction methods.

In contrast to current cyanide and acid based extraction, the study found the EnviroLeach reagent was safer to handle and functioned just as effectively at low temperatures and near neutral pH levels.

The formula is also cost-effective because it can be reused. “Not only does it offer an environmentally friendly solution but it offers a sustainable solution,” Nelson says.

The company has caught the attention of more than 140 mining firms, manufacturers and recyclers of electronics in more than 17 different countries.

While he wouldn’t name any names, Nelson states the group is in talks with some large clients in mining and some of the biggest manufacturers in e-waste.

“Everybody that we talk to is very excited by this technology,” he says.  “In the mining sector, there’s been such a lack of innovation.  This is the most exciting innovation since the advent of cyanide.”

EnviroLeach, spun out of Iberian Minerals in December 2016, has started construction of a 10 tonne per day e-waste processing plant with Mineworx Technologies.  It will have initial annual capacity of 2,500 tonnes of PCBAs, making it the largest and most environmentally friendly chemistry-based e-waste processing facility in North America.

The plant, which is expected to be completed by the end of Q4 2017, will handle all aspects of the e-waste recycling process, including material pre-treatment, shredding, grinding, leaching and metal extraction.

Operating costs, capital costs, development timelines and permitting procedures are expected to be much lower than those associated with a typical mining project.

EnviroLeach believes e-waste recycling will play a significant role in the coming decade as the volume of electronic products going into landfills continues to grow at a worrying rate.

“Apple, Microsoft, DELL, CISCO and others are all looking for environmentally responsible recycling alternatives for their components,” Nelson says.

The company sees a continued rise in demand for gold in electronics as the number of mines is limited, the costs are higher, and the mines are often located in challenging political and geographic locations.  Nelson says that by using the company’s formula, miners will also be able to set up shop in areas that are prohibited from using cyanide.

He also believes urban mining provides tremendous opportunity.  “Previously, the only way to get gold out of e-waste was to put it into a smelter or use hot acid solutions, which is not cost effective.  It’s not sustainable, and not healthy for the environment,” Nelson explains.

This story was originally published at www.proactiveinvestors.com on August 23, 2017 and featured in The CSE Quarterly.

Learn more about EVI Global Group Developments Corp. at https://enviroleach.com/ and on the CSE website at http://thecse.com/en/listings/mining/evi-global-group-developments-corp.