Summer may be long gone but the heat is still on at the Canadian Securities Exchange. With September in the books and October about to draw to a close, the CSE has just announced that the first half of the fall season has brought with it continued positive performance for listing, capital raising and trading volume metrics.

Listings have grown by over 23% since the end of September 2013, with 60 issuers joining just this year from across various sectors.

Turning up the Volume

Listings aren’t the only component of the CSE’s business that are experiencing record-breaking growth; trading volume is also having a banner year. 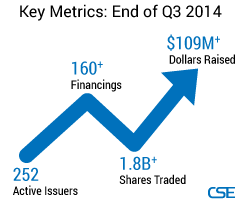 The message the market seems to be telling the CSE is ‘stay the course’. Not only has the CSE’s approach of lowering financial and operational burdens helped make financial capital easier to access, support initiatives for listed issuers has helped to contribute intellectual capital.

For example, this past summer, the CSE held an information session for listed companies interested in listing on the OTC Market in the US. Also, the CSE just completed an event for listed companies focused on delivering successful investor roadshows in advance of companies touring Europe looking to raise capital.

Although the achievements to date are noteworthy, it looks like the close of 2014 will have several more pieces of positive news. Interest in joining the CSE remains high and there are already a number of issuers in the process of coming aboard.

As this past year of new listings has shown, putting a premium on efficiency and growth is not restricted to any one sector or company. Despite their diversity of business types, many emerging and growing companies agree on a simple fact: the more lean the operation, the better the odds of being able to run the marathon instead of being held back by costs.