Records just can’t seem to catch a break this year. Across North America major equity markets have all pushed to new highs as the wave of demand for equities continues its surge upward.

Like many of its counterparts this year, the CSE has also enjoyed a record breaking summer.

By the end of July, there were 8 new listings from a diverse set of sectors that joined the CSE bringing the grand total of listings on the exchange to 236.

Joining the exchange were:

Listings, however, weren’t the only strong point in July. Momentum in other critical areas of the exchange also remained positive.

Trading activity in July, for example, came in at approximately 250 million shares traded and trading value reached over $52 million. These figures are just shy of the record breaking figures from June demonstrating that there is substantial interest in names traded on the CSE.

Accessibility to the exchange also increased for traders in July. The CSE announced that Vantage Wire will now carry real-time quotes on securities traded on the exchange, joining the growing list of major quote data feed providers.

The home stretch of 2014 should prove to be an exciting one in the history of the CSE.  With listings deals already in the pipeline,  August will continue to add to the record-breaking summer.

What is especially noteworthy, however, is that these exceptional listing and trading figures have been posted in what were supposed to have been the typically ‘quiet’ months.

With major events coming up this fall as well as an expected pick-up in the activity across the markets, the CSE doesn’t seem like they’re going to give the record books much time to rest any time soon.

If you’re wondering where the hottest place in Canada is this summer, it very well may be the CSE.

With a new record high number of listings in June 2014, the CSE is on pace to have its best year yet in terms of listings and trading activity and there is still plenty of time left on the calendar.

As we cross the halfway mark of 2014, the CSE has already seen 35 new listings join the exchange to date with 13 new listings added in June. The previous record for listings in a month was 10 (December 2010) and the previous high number of listings within a year (37) is within reach.

New to the exchange this month are:

New listings weren’t the only highlight, however, as trading volumes were equally as impressive. Over 257 million shares traded in June making it the third highest (so far) in terms of trading activity. 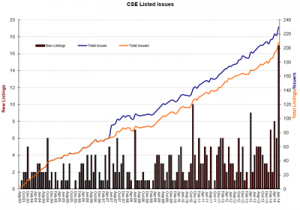 This past year has seen a surge in interest from public companies large and small who are looking to enhance their competitiveness by focusing on efficient use of capital. In this regard, the CSE continues to be an important option to consider, especially for entrepreneurially minded organizations.

While cost control is key, many companies also know that growth also comes with increased exposure. The OTC Market Group’s recent announcement of the CSE as a qualified foreign stock exchange means that companies can now have enhanced access to wider pools of capital across the continent.

While there may not be a ‘magic formula’ at work, the CSE believes that there are key ingredients entrepreneurial companies need for success: access to capital, operational simplicity and, most importantly, choice.   As Managing Director of Listings Development Akthem Sumrain put it “the continued success that CSE is experiencing is further proof that there is in fact a much needed alternative in the Canadian capital markets.”

Like many of the entrepreneurs on and considering the exchange, the summer will continue to be a busy one. That said, despite the heat outside, the CSE and its supporters will be looking forward to a forecast that goes into the upper 30’s and beyond.