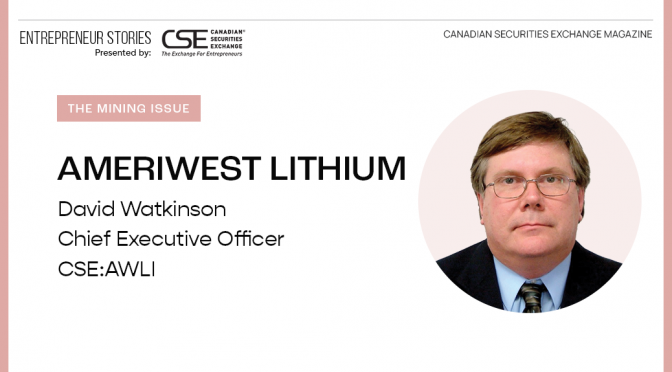 Nevada is a hot spot for lithium exploration: Clayton Valley in particular is a mature, well-known, lithium-rich area that includes the only production in the United States, at Albemarle’s Silver Peak lithium mine.

Throughout the state, major players are scouting for the sought-after metal as demand soars due to the shift to green energy solutions powered by lithium-based batteries. The US government has also announced measures to increase domestic production of the metals and minerals that are used in advanced technologies, in order to reduce reliance on foreign suppliers.

Ameriwest Lithium (CSE:AWLI) is a new, up-and-coming player in the lithium space in Nevada.  It has put together three highly promising early-stage lithium properties in that state and a fourth one in Arizona.  And they are in handy locations as well.  Railroad Valley is the most advanced property and is located about 260 kilometres east-northeast of Clayton Valley.  Edwards Creek Valley is located 225 kilometres west of Reno.  Deer Musk East is in Clayton Valley.  Thompson Valley is 190 kilometres north of Phoenix.

“We made the decision to move into the lithium space in March of 2021, so it’s been just more than a year since we made the transition,” says Watkinson. “Certainly, we see lithium as being one of the hottest metals to look for from an exploration point of view and to generate investor interest. Demand is increasing as we move to electric vehicles, and then there is the need for battery storage as we move to solar and wind energy. So, lithium is going to be something that increases in value over time. It’s a great opportunity for us as a company and for investors to get involved in the lithium area.”

With a number of other explorers also looking for the next big lithium find in Nevada, Watkinson says the technical team that Ameriwest has put together is an important factor, allowing it to grow and acquire what it believes are very good quality assets. The combined technical team has over 170 years of experience in the mining industry.

“There is certainly risk in an exploration company because, especially with a brine target, you can do surface sampling, but that doesn’t really help you to identify a brine target that might be 2,000 feet below surface,” he adds. “Our exploration strategy, using geophysics the way we have, helps set us apart. I don’t see other junior mining companies necessarily taking the same technical approach to define targets. The geologists we have put together and the management team has the ability to go out and find high-quality projects and also to understand and develop the resources on those projects.”

Once the company has a clearly defined resource, Watkinson says it will augment the technical team with other specialists like metallurgists. However, he adds that it is probably up to two years before it gets to that point.

Ameriwest chose Nevada as its starting point of the focus on lithium, acquiring a series of properties, all of which contain lithium brine targets.  Railroad Valley, Ameriwest’s most advanced project, has brine targets identified by geophysics in preparation for drilling.

In neighbouring Arizona, Ameriwest’s latest acquisition, Thompson Valley, is a prospective lithium sedimentary deposit with surface or near-surface exposure of lithium-bearing clays that were sampled in the early 1960s.  Geologic mapping is complete, which will be followed by permitting to allow surface sampling and drilling.

“We are trying to get a mix of brine, sedimentary, and, if we can find a hard rock deposit, we would look at that too,” Watkinson says. “While there are technical and environmental challenges when it comes to processing and recovering lithium from various deposit types, the lithium industry is really developing. The technology for processing is being developed almost on a month-by-month basis to handle different types of deposits.”

While the Ameriwest portfolio is shaping up nicely, Watkinson hastens to point out that the projects are all early in nature.  While Albemarle and its predecessor companies have been operating Silver Peak in Clayton Valley since the 1960s, exploration for new lithium properties in the US is essentially a recent phenomenon. With the movement to electric vehicles and alternative energy sources, there is a race to develop new operating mines.

“Exploration success at any one of these properties could change the fate of the company if we’re successful in discovering significant lithium targets,” says Watkinson.

Ameriwest’s approach to exploration for lithium brine has been to use geophysics. It typically undertakes a gravity geophysics survey that identifies targets in arid valleys where brine may have accumulated and become concentrated over millions of years. Magnetotelluric geophysics looks at the resistivity (or conversely the conductivity) of the subsurface, which helps indicate the potential for a concentrated brine.

Further seismic analysis helps identify structures such as faults, horsts and grabens that might be subsurface.  This data is then modelled and used to locate drill holes to target conductive brine targets that might host a lithium-bearing reservoir.  The modelling is also used to help target drilling to avoid structures like faults below the surface that might be encountered.

Geophysics also helps in perfecting the claim package staked or acquired by the company. Following acquisition, a gravity survey at Railroad Valley was completed and the claim boundaries have been expanded based on the results. Additional claims were also acquired from American Battery Technology Company to the north, resulting in 780 contiguous claims over 15,300 acres.  A similar targeting approach was used at Edwards Creek Valley where the company has 829 claims totalling about 22,200 acres.

Potential brine targets have already been identified at Railroad Valley and after analysing the geophysical data it has collected, the company plans to drill its first hole later this year targeting a reservoir that potentially hosts lithium brine.  The timing for drilling will be subject to permitting and availability of drilling equipment.

“The geophysics shows us the target, but the drill hole will be proof of concept that it’s there,” Watkinson says. “There’s permitting that will be done for the initial drilling; that’s relatively simple but when we get to developing resources, the permitting becomes more complicated. In the United States, there’s certainly a movement by the government to push the development of critical metals like lithium, but the challenge is moving through the permitting process, and it takes time. So, it’ll take several years to develop our deposit.”

It also takes capital, and Watkinson says Ameriwest has sufficient funds for the initial steps it is taking to identify potential brine targets. Once it reaches the development stages, it will have to raise additional funds or find joint venture partners with deeper pockets, such as one or more of the mining majors.

“We’ll evaluate all those different opportunities,” he says. “Certainly, we have the ability to push the project through and develop it into production if we decide to go that route. But we also would like to take advantage of relationships with senior partners on advanced projects and have them come in and develop. They typically have a lot more expertise in processing and can fund larger capital projects.”

While Albemarle has extracted lithium at its Silver Peak mine by pumping brine and using evaporation ponds to concentrate the lithium before processing, Watkinson says that method is falling out of favour from an environmental perspective due to the amount of water it uses.  New technologies being developed are aimed at pumping fluid back into the aquifer after the lithium has been removed.

Ameriwest is not getting ahead of itself, says Watkinson. For now, the goal is to develop resources. Once those are established, the company will make a decision on the direction it takes as either a lithium producer, a project generator, or to seek out major companies to form joint ventures with.

“As we develop resources there will be a transition the company goes through,” he says. “Our goal right now is to delineate resources on our properties and try to add value by doing that in the short term.  We have put together a high-quality technical team, acquired what we believe are high quality properties, and are minimizing exploration risk by developing multiple assets.  We have laid the foundation for long-term success with the goal of becoming a major lithium exploration and development company.”