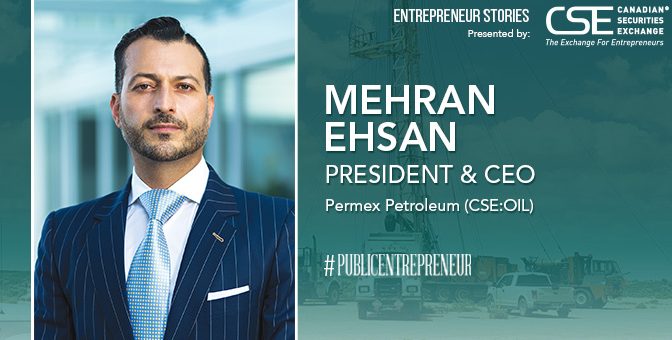 As we close in on the final month of 2018, global oil prices have gone topsy-turvy, with predictions of $100 oil just a few weeks ago giving way to concern that the recent 25%+ drop to below $55 per barrel (for benchmark West Texas Intermediate) could grow even steeper.

In an environment with this level of volatility, junior oil and gas companies need quality assets, good financial structure and adequate funding, not to mention a reasonable degree of managerial flexibility.

Originally founded in 2013 and then restructured into a corporation in 2017 by President and Chief Executive Officer Mehran Ehsan, Permex operates primarily in the Permian Basin of Texas, which Ehsan calls one of the best environments in the oil and gas industry. The properties, projects and formations in this area are so popular that a new word has been added to industry vocabulary: ‘Permania.’

All the excitement is justified, mind you, as Ehsan explains in compelling fashion.

Even more important, according to Ehsan, is rig count, as this is a measure of investment dollars going into a region. “There are 475 rigs in the Permian, which is more than 40% of US rigs,” says Ehsan, adding that this number also represents around 20% of all oil rigs operating worldwide.

One of the oldest adages in the stock market is to buy low and sell high, and Ehsan utilizes a similar approach to execute the Permex business plan. The company adds assets to its portfolio in times of general industry distress, thus enabling it to buy properties at a discount.

Importantly, Permex only buys properties that are in production or can be brought online at Permex’s timeline and discretion.  Ehsan only considers properties that the company can produce from on day one from active wells, and potentially drill later with an exceedingly high probability of success.

“The timing of our acquisitions has been key,” Ehsan adds. “We acquired assets during a downcycle at an average cost of US$2,000 per acre, and now properties in our area go for anywhere from US$17,000 per acre to US$25,000.”

Permex is careful to only operate in regions where producing formations tend to provide some of the highest historic success ratios, low production costs, extensive infrastructure to get end-product to market, and, importantly, a regulatory regime that favours the industry instead of throwing red tape at it. West Texas and South East New Mexico tick all those boxes.

In fact, one of the formations that Permex wells produce from, the San Andres, has a breakeven cost of US$29 per barrel.

“We have eight properties in West Texas and Southeast New Mexico,” Ehsan says. “Out of those eight, six qualify for water flood EOR (enhanced oil recovery) techniques.  To date, our focus has not been to devote too much to capital expenditures. We wanted to purchase assets at a discount during an industry downcycle which caused duress for a lot of operators. Every dollar spent on Capex would have been a dollar we could have used to buy assets at a discount from such operators.”

In the last two quarters, Permex has begun to bring shut-in wells online and use water floods to pressurize reservoirs to enhance production. And the next stage of Ehsan’s strategy really enables Permex to scale its top line.

“Drilling wells in general will give us scale, however we have access to some of the best formations to drill horizontally which can provide remarkable daily production and payouts of under 10 months,” says Ehsan. “Offset operators such as Ring Energy are doing so all around our properties. We anticipate starting our horizontal drilling programs in H1 2019, which can rapidly give scale to the company.”

That timeline is prudent, as overall production in the Permian has increased to the extent that there are bottlenecks in the pipelines that transport oil to market, and the result is that producers are having to accept a discount to the standard WTI price, although it is nowhere near the discount Canadian producers are exposed to right now.

Again, this is where location comes into play, as adding pipeline capacity in Texas is much easier than it is in most other jurisdictions. Ehsan says there are four expansion projects in the works, one of which should come online in the first quarter of 2019. The added capacity should begin to shrink the price differential immediately, and eventually eliminate it altogether. This would put smiles on the faces of companies big and small, and it’s worth noting who some of the big ones operating side-by-side with Permex are.

Occidental Petroleum has a major presence in the Permian, as new chief executive officer Vicki Hollub has shifted operations from a Middle East focus to one more on domestic production, such as in the Permian. Occidental is actually a working interest partner with Permex on one of its properties. Other offset operators to Permex include large-cap oil giants such as Devon, Hess, Apache and Conoco Phillips.

Asked for some closing thoughts, Ehsan points to general investor malaise when it comes to oil and gas stocks yet sees it as an opportunity to apply some ‘Permexian’ thinking. “If you take into account our sector as a whole in the US and Canada right now, almost every company is undervalued,” Ehsan concludes. “Usually, oil and gas stocks follow the oil price, but in recent times when oil has risen, the stocks haven’t followed suit. You could say this is a great time to look at investment in the oil and gas sector, as it is ripe for the picking.”

This story was originally published at proactiveinvestors.com on January 15, 2019 and featured in the Public Entrepreneur magazine.