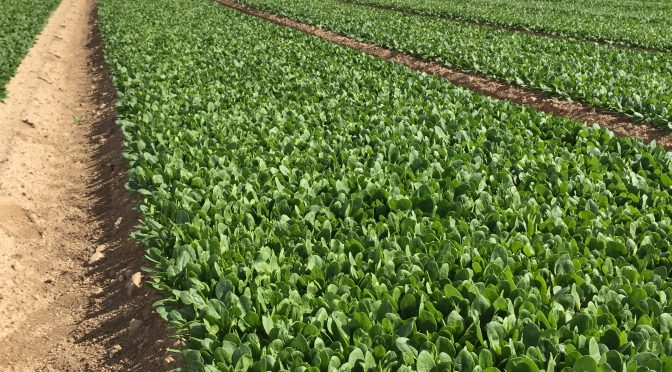 This story was originally published at www.proactiveinvestors.com on May 17, 2016 and featured in The CSE Quarterly.

A neat carpet of green can be seen stretching as far as the eye can see, like a well-tended lawn of some grand country manor. But this is right in the middle of the California desert.

It’s just one of Captiva Verde’s (CSE:VEG) many organic vegetable farms in isolated patches across the California and Arizona desert.

Being organic, the farms deploy no chemical pesticides or synthetic fertilizers.

There is a big cultural shift as organic becomes the mainstream, with 78% of US families buying organic produce, which means it’s big business… if you can get it right.

Organic farms are 35% more profitable than the average farm and in retail stores organic prices are typically double conventional prices. Yet currently only 0.5% of US farmland is suitable for organics.

From renewable energy to organic farming

Captiva Verde is taking a run at this giant market. Worth just CDN $20.5 million, it is fair to say the company is a comparative minnow in the field of agriculture.

But founder Jeff Ciachurski is ambitious: “You’ve got to have a lot of guts,” he says. “You need to go in with a big operation and take the chance.”

Ciachurski made his fortune in sustainable power after he founded Western Wind in 2002 with an initial investment of CDN $250,000.

Just over ten years later he sold the company to Brookfield Renewable Energy Partners for $420 million.

As important as the project is the person behind it; the man or woman with the relentless drive and will to win.

“I made a very big success for my shareholders; in fact I was one of the few guys in the entire worldwide market place that made a whole lot of money in the wind and solar space,” says Ciachurski.

“So I’ve got a knack for finding high quality deals and ones that really take a lot of perseverance, a lot of emotional energy and challenges.”

And he thinks there are lessons he learned from his former employment that are directly applicable to the world of organics.

“There is a huge regulatory landscape you need to navigate. But we successful entrepreneurs take on the big challenges,” Ciachurski says.

Captiva Verde was founded in 2014 and is certified by the United States Department of Agriculture (USDA).

Ciachurski’s team now farms 3,700 acres, the majority of which is leased, and the group is looking to add another 2,270 acres in the southwest US for organic cultivation.

The farmland is managed by a team with extensive experience in organic vegetable farming, food processing, clean energy and land development in California and Arizona.

The isolated fields in Arizona, Imperial Valley and Tehachapi are all at different elevations for production synched to optimal climate conditions, allowing for 365 day a year harvesting and crop rotation.

If the vision above is one of man in harmony with his environment, then the state of California, with some 20,000 organic farms, reveals what happens when agriculture of this sort is done on an industrial scale.

A big risk with big money

It has been a challenge for Captiva Verde, not just meeting the exacting farming standards, but winning over retailers.

“The certification program in California is so tough. The reality of organics is that the standards are way beyond what you’d call sustainable,” said Ciachurski.

“The US is a very litigious place, California especially so. There is a very large and robust food safety program. You want to make sure the buyers know you have a top rated food certification.”

Scrutiny was intense to gain National Organic Program certification. And meeting the food standards and safety criteria can be very costly, which is often a deterrent or inhibitor to smaller, less well-funded groups.

How many small businesses could fund a four-mile fence to avoid cross-contamination from animals? Captiva was forced to bear these costs to gain USDA certification for just one 600-acre farm.

“We take 300 tissue samples per acre to test for bacteria,” states Ciachurski.

“All this can be a big setback for the smaller guys, who often have to sell at the farmers market because the big end retailers would not find their standards remotely adequate to get onto their shelves.

“That’s why you have to raise the capital; it’s a big risk with big money at the start.”

Captiva also had to convince potential buyers of produce that its farms were capable of producing enough to meet the demand from retailers such as Whole Foods and Trader Joe’s.

It was stuck for five months in the spot market, where prices fluctuate minute to minute, while it proved its output was reliable.

“The risk is no one will buy from you until you can prove to them you can grow big quantities. At one time US $9 million worth of supply had to be re-ploughed back into the ground,” Ciachurski laments.

It’s only really in the last month Captiva has found itself in the happy position of selling all its production on contract.

“That means that everything we grew already had a buyer by the time it goes in the ground,” adds Ciachurski.

So what does the future hold?

The organic vegetable market is worth around US $35 billion a year and is expanding at some 12-15% annually. That rate is forecast for the next 10 years.

“We are the only company that even has those kinds of revenues on the CSE and the only publicly traded 100% organic farming company,” he points out.

Further expansion is on the books as Captiva looks to some strategic acquisitions.

The company announced last month that it was considering buying two companies – a large food broker and a substantial salad making operation – to expand right through the organic produce supply chain.

The acquisitions will add a further US $13 million of sales a year for the group.

“We’re a growing company in a growing market. Since October 2015 we started from zero sales to now US $1 million a month. Now, as of May, we are moving to US $2.5 million a month,” explains Ciachurski.

“We are fast making money in a dynamically growing sector, and that’s what investors want to see.”

Learn more about Captiva Verde Industries Ltd. at http://www.veg.net/ and on the CSE website at http://thecse.com/en/listings/diversified-industries/captiva-verde-industries-ltd