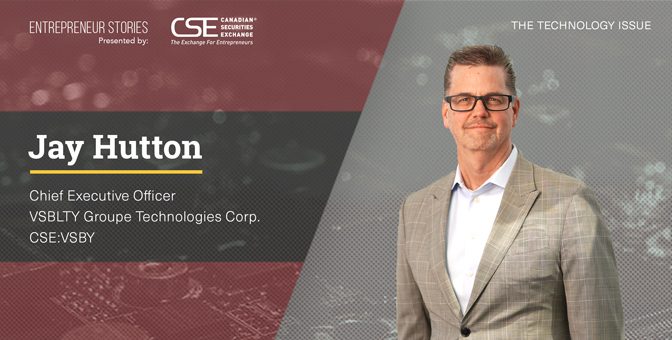 In the 2002 Steven Spielberg movie Minority Report, a perplexed Tom Cruise enters a futuristic Gap store and is immediately greeted by a friendly face on a digital screen welcoming him and asking about his recent purchase. Twenty years ago it seemed like a far-flung idea, but today Cruise’s interaction is well within the realm of possibility for the modern shopper.

In a sense, the futuristic shopping experience is an early example of the use of proactive digital display, a technology that Philadelphia-based VSBLTY Groupe Technologies (CSE:VSBY) is pioneering for the retail and security sectors. Artificial intelligence and machine learning comprise much of the horsepower behind this transformative product.

“Everything in that movie is absolutely what we can do right now without any stretch,” says VSBLTY Chief Executive Officer Jay Hutton. “Right now, we are gathering metadata, or non-identifiable information, to aggregate and collate at scale.”

The idea for VSBLTY came together in the minds of Hutton and business partner Tim Huckaby, a developer at Microsoft and now VSBLTY’s Chief Technical Officer. The two believed the big players in digital display had failed to innovate over the last decade and that the industry was poised to undergo significant disruption.

Was there a way to create digital signage that contained computer vision software to measure quantitative and qualitative engagements and interactions? Hutton and Huckaby knew that previously uncaptured metrics such as the characteristics of individual shoppers could provide valuable insight to retailers.

For today’s retailer, traditional point-of-sale and out-of-home advertising provides limited engagement with the consumer and does not generate data to analyze. The VSBLTY platform integrates signage, security and analytics to optimize opportunities throughout a store.

“The physical store supplants the internet as a premium place for brands to deliver impressions because the shopper is in a place where they can buy the product being promoted – it’s instant gratification,” Hutton explains. “Brands will re-vector internet spend to stores because the store is more measurable, more instantaneous and more connected to upselling, or sales lift.”

Results from successful activations have challenged long-held assumptions about shopper behaviour. One example, centred around the March Madness basketball tournament, started with the idea that men aged 25 to 40 would rather not cook a meal when they are watching games. VSBLTY’s software was deployed in the frozen foods aisle of a grocery store using five different products and measured on multiple engagement types such as traffic, coupon redemption and sales. The outcome? An approximately 500% increase in engagement compared to conventional signage in the frozen foods section, and three times the coupon redemptions. In an unintended result, the entire frozen foods aisle saw a sales boost.

The shift from wanting more impressions to more qualitative engagements is a seismic trend in the marketing world. Companies are using phrases like “customer intimacy” and “brand engagement” more than ever, Hutton says. “The companies know the only way to get to this ‘promised land’ is through digital means. It’s enormously disruptive.”

For companies, it’s not so much a question of if they can use it, but if they will. There are very real privacy – and legal – concerns associated with this type of technology, which Hutton acknowledges. He shares that one large brand eager to adopt the software believes customers are ready for it, but the company wants to navigate the legal complexities before it commits to installation.

But there’s a “clear runway” to adoption, Hutton says, as a new generation raised with the internet comes to the fore. Shoppers can opt in to the experience much the same way as they do by using a points card or a brand’s mobile application. It’s exchanging privacy for value, Hutton says. “I’m willing to give up some things that are germane and intimate to me in exchange for some value. That’s an open, ongoing dialogue in retail.”

The probability of the younger generation accepting this trade-off is much higher than with older consumers, which is partly why retailers haven’t adopted the technology en masse. “The brands know it’s a waiting game,” Hutton says. “If they do it now, they may only see, at best, 30% opt-ins, but years from now, it’s 75%.”

Retailers are expected to fully understand the model over time, and the same goes for using the displays to enhance security. Deployed in the public sphere, the technology could be used to help identify people with warrants out for their arrest or to pinpoint anomalous behaviour. “Our hypothesis is that we are overwhelming our operators with too much to look at,” Hutton says. “By letting the software analyze the information, we’re giving the operator some context.”

One of VSBLTY’s biggest deals was signed in 2019 with Energetika, an international provider of lighting solutions, to install thousands of security kits powered by VSBLTY software in Mexico City.

Energetika deployed cameras and VSBLTY ran the analytics, looking for altercations, fires, car accidents, persons of interest and gathering crowds. Around six months into the project, the crime rate has fallen by a significant amount in several of the city’s 16 boroughs. One of these, Cuajimalpa de Morelos, went from 11th safest to safest in about seven months. “It’s like a cyber neighbourhood watch leading to an outcome that you could argue is valid and reasonable,” Hutton explains.

The technology is also being deployed to help contain the COVID-19 pandemic, according to Hutton. VSBLTY recently teamed up with a cyber security product and building services company to provide advanced camera technology that enhances security and enables temperature screening before people enter office buildings.

“Computer vision has the ability to identify who you are, whether you’re supposed to be where you are and determine if you’re showing any fever symptoms,” Hutton says. “That’s a really interesting connection point between what we currently do and what COVID-19 is requiring us as a society to do.”

The company is looking ahead to a busy 2020 as its pandemic involvement adds more to an already full plate. In 2019, VSBLTY received more orders in the fourth quarter than it had in the first three quarters combined, and it saw its first seven-figure order in the first quarter of 2020.

The challenge now is to keep momentum going throughout the coronavirus pandemic. But Hutton still anticipates that 2020 will be the company’s first profitable year, offering revenue guidance of between $10 million and $15 million.

If VSBLTY’s success is any indication, that Gap store in Minority Report may become reality before we know it. “Brands are dominated by people who grew up on the internet and understand that impressions are best maximized where there’s measurement,” says Hutton. “What’s happening in that movie is not too far away.”