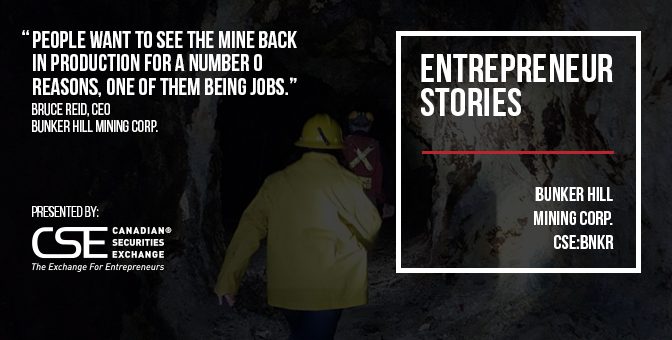 Mining investment is back in a big way if the first quarter of 2018 is any indication, and it’s helping set the stage for one of the largest and most storied mines in the United States to finally come back onstream – the Bunker Hill Mine in Idaho’s Coeur d’Alene Mining District.

Seasoned mining industry observers won’t be surprised to learn that the man behind the project is Bruce Reid, Chief Executive Officer of Bunker Hill Mining (CSE:BNKR). Reid has acquired, worked on and sold six mines in his career, five of which are currently in production (number six is slated to begin producing in 2020 or 2021). Bunker Hill will make seven and mark the culmination of an effort ongoing for over two decades.

“I tried twice in the last 20 years to get Bunker Hill but wasn’t able,” Reid explains. “When the largest shareholder of what has become Bunker Hill Mining asked me to lead his company, I told him, ‘Go get the Bunker.’”

Sure enough, he got it, although the deal originally agreed with the heirs of the long-time owner was re-written in August 2017, shortly after Bunker Hill Mining began trading on the CSE.

The Bunker Hill mine went into production in the mid-1880s and remained in operation until 1981. For many years early in its life it was said to be one of the largest mines in the world.

“Bunker Hill leads the way as one of the most important mines ever in American history,” says Reid. “It produced over 35 million tons of high-grade lead-zinc, about 8.5% lead, 4.5% zinc and 2 to 3 ounces of silver. When it closed it had resources and reserves of over 60 million tons, or almost twice what had been mined.

“Collectively, it has about 9 million tons of 5.5% to 6% zinc, 2% lead and a little more than an ounce of silver left in stopes that are already open and not flooded.”

That is a major amount of rock waiting to be harvested, and the cost of getting the mine back up and running is far from astronomical. Just US$15mln would re-launch operations at 1,000 tons per day, and scaling up to 3,000 tons per day, as plans call for within two years, could make Bunker Hill the largest lead-zinc-silver mine in the United States outside of the gigantic Red Dog mine in Alaska, according to Reid.

Why, then, if all that ore is just sitting there has the mine remained inactive for so long? The owner at the time proved hard to convince and the US Environmental Protection Agency (EPA) was heavily involved as well, running a wastewater treatment facility onsite to deal with acidic effluent. While the Mine itself was not involved, the associated lead-zinc smelter caused significant pollution in the entire Silver Valley and the district was the site of a billion dollar cleanup through the EPA Superfund. That is mostly completed now as the Valley is in much better condition.

The deal now in place with the mine owners is a 24-month lease under which the project can be purchased for US$25mln over 10 years. Another US$20mln would go to the EPA, this amount a partial acknowledgement of costs accumulated for clean-up over the years. An operating Bunker Hill Mine would also pay the EPA $1 million per year to continue operating the wastewater plant.

“The EPA has proven to be a good partner — they are reasonable,” says Reid. “People want to see the mine back in production for a number of reasons, one of them being jobs. But also, this mine, if left alone, will only get more troublesome as parts internally break and water starts leaking from different areas. If it’s in production, however, we’d have the cash flow and earnings to build up the closure bond, and to take care of many longer term problematic areas.

Reid is not only a formally trained geologist, but also a former analyst and successful investment banker. He thus has detailed insight into the metals markets Bunker Hill would once again serve.

“Zinc is in a deficit in terms of the raw metal,” Reid explains. “We are still losing production even with the price being up, and some mines that have been dragged back into production are running out of ore. The zinc concentrate market is even tighter – it looks like concentrate could be in deficit for another three years.”

And while one might think the omnipresent talk about future battery technologies would undermine the lead market, Reid says it is “amazing” how tight the lead concentrate market is right now.

Details regarding the path to production for Bunker Hill are still to be decided but could entail initially toll milling (utilising another entity’s mill), although ultimately the company will want to build its own mill plant.

“My estimate is that starting the mine utilising a toll milling arrangement is estimated to be about $10 million including working capital,” explains Reid. “I’m in active discussions with a number of financiers and toll milling partners and we hope to be in production in 2018. The longer term goal, though, is to build our own expandable process plant right on site, which is also part of the Patented Land package involving the entire Bunker Hill Mine site.”

It is an amazingly near-term timeline for a small company that began trading less than a year ago, but given the Bunker Hill Mine’s size, grade and favourable jurisdiction, plus the strength of Reid and his team of local professionals, the market is buying in, having taken the company’s share price as high as $3.15 since its debut.

Also amazing to observers who know how the financial markets work is that Reid, his team and that the one large shareholder have put their shares into a voting trust and none of the shares can be sold until there is a change of control, which is another way to say that Reid must sell the entire company for the insiders to ever realise on their share positions. We’re talking approximately 15 million shares out of the company’s 33 million outstanding.

That lock-up suits Reid just fine. He knows he has a monster by the tail and his track record suggests that few people could be better at finding a buyer when the time comes.

“This is one of the most important lead-zinc resources in the Americas that is not producing currently,” Reid concludes. “And then once we put it into production we’ll follow up with a drill programme to beef up reserves and resources. Bunker Hill is a big one. It will outlast us all.”

This story was originally published at www.proactiveinvestors.com on March 5, 2018 and featured in The Public Entrepreneur.

Learn more about Bunker Hill Mining Corp. at http://www.bunkerhillmining.com/ and on the CSE website at http://thecse.com/en/listings/mining/bunker-hill-mining-corp. 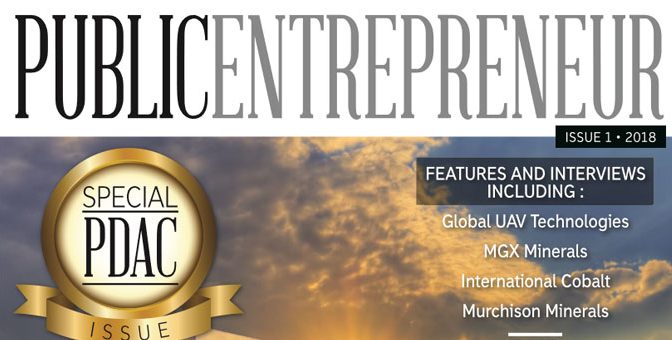 Public Entrepreneur represents a bold and exciting new chapter in the CSE’s story, one that will better reflect the growing presence of the “Exchange for Entrepreneurs” in the Canadian public market space.

With over 350 securities now listed on the CSE and more joining every day, share turnover measured in the billions and innovative new services, like tokenized securities being brought to market, we believe this new magazine will chronicle the next chapter in the CSE’s storied commitment to public entrepreneurship.

To that end, Public Entrepreneur will continue the traditions started by its predecessor, the CSE Quarterly, namely, to focus on the stories and entrepreneurs that emerge from CSE-listed issuers. Publication will also continue to take place quarterly. What is new, however, is that Public Entrepreneur will also broaden its scope to include coverage of the opportunities and personalities that shape life in Canadian public markets.

CSE-listed firms profiled in this issue include:

We hope you enjoy this first issue of Public Entrepreneur and look forward to bringing readers even more great content in the next issue. For readers interested in accessing archives of the CSE Quarterly,  click here.