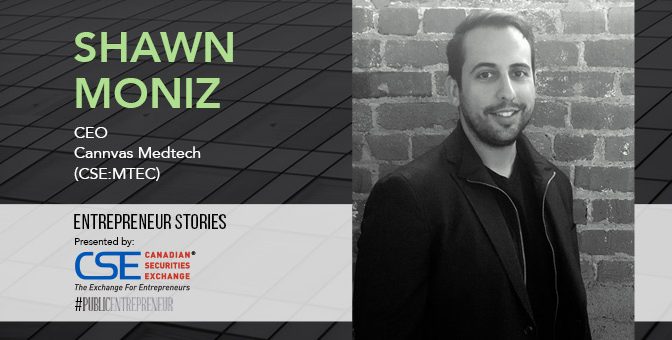 “We really want to be the Google of cannabis data,” is how Chief Executive Officer Shawn Moniz sums up the mission of Cannvas MedTech (CSE:MTEC), a Toronto-based startup that specializes in educating the public about marijuana.

Having watched from the sidelines as Canadian companies sprung up to offer marijuana and its associated hardware, such as vaporizers, Moniz chose the less-travelled road of education when he launched his own cannabis company.

“The benefit of being a digital reference library of cannabis is that we can go into any country and people can learn about the different uses and a safe way of using cannabis if they so choose,” he says. “We are not dependent on any type of legislation or political maneuvering because it’s education, and education has no borders.”

Cannvas MedTech went public in July on the Canadian Securities Exchange as well as the Frankfurt Stock Exchange.

“We wanted to carve a little niche for us,” Moniz says. “We found there were a whole bunch of people growing … and on the other side, everyone was getting into devices, vaporizers and oil vaporizers. But we thought we don’t really want to go into those two spaces.”

Moniz decided instead to offer straight talk about cannabis after spending five years building platforms for big pharmaceutical companies like Pfizer, AstraZeneca and Bayer – which tended to put patients first in discussions about drugs.

He was concerned that the information being disseminated about cannabis reflected the interests of the licensed producers funding it. “We saw very biased information,” he says. “There was a need that no one was willing to plug.”

“So, I said hey, why don’t we just do what I did in the digital pharma space and bring that patient-centric approach to the cannabis industry,” he adds.

At the core of Cannvas MedTech’s business is its website Cannvas.Me, which provides online cannabis courses for free. Cannvas.Me offers the chance to read about cannabis’ medical applications in materials put out by physicians along with an online cannabis course, marijuana product reviews and a cannabis strain matcher that determines which variety is suitable for a specific ailment. The goal is to reach 100,000 users of the platform by the year’s close.

As more marijuana buyers explore Cannvas MedTech’s web site, they will provide data that will power the analytical side of Cannvas’s business, which has the lofty goal of providing the equivalent of census data for the cannabis industry.

Indeed, layered just below its education platform is Cannvas Data, which uses algorithms to pull apart the research on cannabis trends and find new data that might be of use.  Via its connections to other cannabis companies, academics, doctors, and governments as well as its own web site, Cannvas management is set to ramp up its data collection around the world.

As Cannvas MedTech’s business takes off, the idea is that its data will become more tailored to the marketing needs of cannabis companies and the research needs of governments, physicians and academics. Its management will be able to tell, for example, how the consumer tastes of a 25-year-old construction worker in Ontario compare to his or her counterpart in Australia. They might also be able to determine the extent to which patients at military bases are taking cannabis to address their cases of post-traumatic stress disorder.

“People educating themselves about cannabis is where we win. There’s a lack of awareness and a lack of education and the data is key to that,” notes Moniz.

Partnerships are pivotal to the company’s ability to gather information. In one of its most prominent tie-ups to date, the company recently signed a revenue sharing agreement for Cannvas.me with the Vancouver-based e-commerce platform Namaste Technologies, which runs medical cannabis patient portal Namaste MD that has a reach extending to 20 countries and boasts a database of 1.5 million users.

Namaste has developed the country’s first cannabis telemedicine app, available on iPhone and Android devices, which allows patients to connect to doctors or nurse practitioners for consultations within minutes.

“The data is really going to set us apart within the industry. The Cannvas.me platform on a global basis will collect all of that data and feed it back into the industry,” reports Moniz.

Cannvas Connect, meanwhile, is the third branch of the business as it offers a secured network to allow for the sharing of Cannvas’s data with, say, Health Canada or the company’s other partners in academic and medical circles.

“Cannvas Data and Cannvas Connect, that’s where we have partnerships with academics and research facilities and we’re trying to do partnerships with the government in Canada,” points out Moniz. “We have analysts here providing insights and trends within the community and global markets.”

While 80% of the business is focused on Canada, the remainder is global and Moniz reports that Cannvas is already reaching out to clinics in Australia and Germany to introduce its software so Australians and Germans can have information on medical cannabis at the doctor’s office. Its management also recently travelled to Hong Kong and Japan and hosted presentations there. “In most parts of Asia, you can’t buy cannabis or legally obtain it,” says Moniz. “But playing on that education format opens up a lot of doors for us.”

The company’s goal is to have software in at least 100 clinics within the next year.

Keen to remain independent from the clutch of licensed marijuana producers who control the industry, Moniz and his management team opted to take Cannvas public instead of approaching companies for money. “We wanted to remain non-biased so the only way to do that is to make sure we got funding agnostic of any licensed producer,” he says.

Since its launch last September, Cannvas has built up a staff of 19 with offices in Vancouver and Toronto. As Cannvas widens its global reach by introducing its software in clinics around the world, it aims to become the international authority on the cannabis sector. Information will drive the company forward, along with the industry itself, Moniz believes.

“From a marketing perspective, it’s very important for the cannabis sector to know who their market is,” says Moniz. “Right now, everyone is just blasting out the same message to everyone whether you’re a medicinal or a recreational user. It’s one message fits all.”