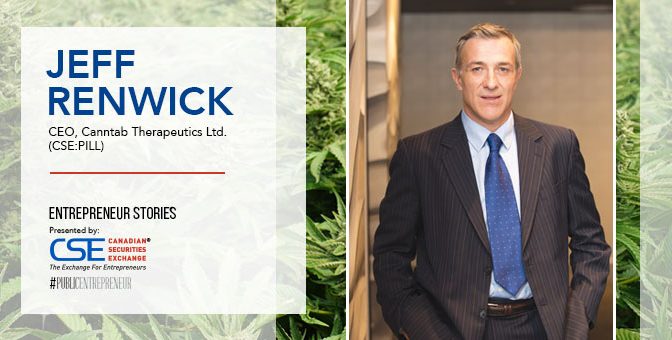 The cannabis market is full of potential and creativity, with companies introducing new and innovative products every day. Dispensaries have gone way beyond smokable marijuana, offering customers everything from cannabis-infused edibles like beer and chocolate to personal care products like lotion and eye creams.

But the cannabis market isn’t all fun and games. Canntab Therapeutics Ltd. (CSE:PILL) is looking to fill a need in the pharmaceutical space.

Based in Ontario, the company was founded by pharmaceutical industry professionals. Chief Executive Officer Jeff Renwick was the former CEO of Orbus Pharma Inc., a generic drug developer and manufacturer. Prior to that, he was at Indukern Chemie AG, a Swiss pharmaceutical company.

Although once a private company, Canntab merged with Telferscot Resources on April 20, 2017 — a date synonymous with marijuana. Exactly one year later, the company went public on the unofficial pot holiday.

The company is presumably the first to offer medical marijuana in pill form.

The technology behind the pill was licensed from a predecessor firm. Since then, Canntab has filed seven patents for its two products. Approval from Health Canada to proceed with third-party clinical trials is in the works.

When a patient smokes marijuana or eats cannabis-infused edibles, it can be difficult to measure exactly how much of the medicinal elements are being delivered.

Chief Financial Officer Richard Goldstein also points to the potential danger of cannabis products being created by those without a pharmaceutical background, without GMP, or “Good Manufacturing Practices,” in place.

“A lot of it is being made in home kitchens and home basements. They’re not being made in the GMP environment. And yet, the marketplace continues to eat this stuff up. It’s quite scary at a level,” says Goldstein. He recalled a story where the tablets were so poorly pressed that they weren’t able to be dissolved in a patient’s system before exiting.

In contrast, the company’s extended-release tablets offer a consistent, stable dose each time and aren’t susceptible to spoiling and converting into other cannabinoid elements when exposed to certain environments like an oil-filled gel capsule would be.

“In true pharma, the only time you use a capsule to deliver medication is when you can’t have a tablet for that medication. If you can have a tablet, that is always the first choice,” says Renwick.

The tablets are intended to treat a variety of disorders, including Post-Traumatic Stress Disorder and arthritis. They can also act as a pain management and appetite loss drug for patients undergoing cancer treatments.

The pill delivery mechanism may also be the first step in reducing the stigma of marijuana by removing the smoking aspect.

Renwick recently had a conversation with a landlord who was spending hours in court after tenants complained about neighbors smoking marijuana, some of whom were using it for legal, medicinal purposes. The pill can be a smokeless alternative in areas where smoking isn’t allowed.

Canntab believes the pill alternative will also appeal to senior citizens who take multiple pills per day, especially in assisted living facilities where smoking may not be allowed.

The company does have a sleeping pill in the works, although clinical trials will still need to be performed.

And a future product line may include cannabis tablets intended to specifically treat sleep and social anxiety disorders.

While the legal landscape is always evolving from place to place, the company has come to agreements to expand outside of Canada.

Canntab is working on import and export permits, with agreements already in place to send tablets to Australia and Germany. Deals with Poland, Spain, and Greece are also being discussed.

Moving into the U.S. market is challenging. Recreational marijuana use is already legal in nine states, including California, Washington, Oregon and Nevada. Medicinal marijuana is legal in a total of 29 states, including those West Coast states as well as East Coast states like New York and Delaware. But on the federal level, cannabis is still illegal.

“Ultimately, we want to get something going in the US, preferably in California,” says Renwick.

The company has said it has a “soft plan” to get there by perhaps 2019. A lawyer is looking into licensing in California on its behalf.

A 2017 Gallup poll found that 64% of Americans support the legalization of marijuana.

Looking to the future, Canntab’s CFO is confident that the company is in good financial shape.

Goldstein notes that the company’s immediate cash needs have been fulfilled after going public.

“The good news is that we have lots of money to do what we want to do in the short term and then as opportunities present themselves, we’ll seek capital if necessary,” says Goldstein.

Learn more about Canntab Therapeutics Limited at http://canntab.ca/ and on the CSE website at http://thecse.com/en/listings/life-sciences/canntab-therapeutics-limited.