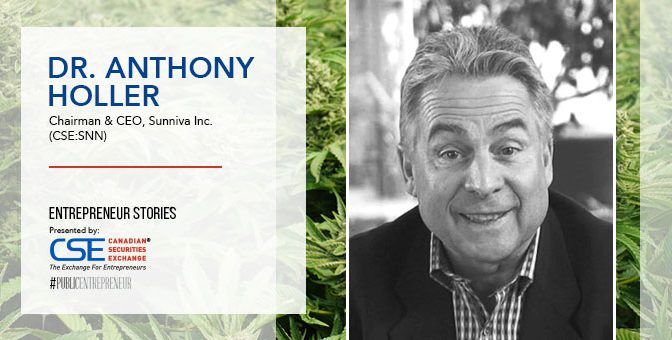 These guidelines play an important role at Sunniva, which is moving quickly to initiate production of cannabis at facilities in both Canada and the United States.  Dr. Holler offered insight on the company’s marketing and risk management strategies in a recent telephone discussion with Public Entrepreneur.

Sunniva is progressing toward large-scale cannabis cultivation in both the United States and Canada.  Let’s start by reviewing your basic business approach.

Sunniva is focused on the two largest cannabis markets in the world – Canada and California.  Our concept involves large-scale, high-technology facilities in a greenhouse format.  That means we can be a low-cost producer, also producing at the highest quality and at scale.

Our facilities, when fully completed and operational, will produce about 100,000kg of dried cannabis per year in each location.

Pre-selling a significant portion of our production is also an important pillar of the business plan.  We have announced that in Canada we have pre-sold 90,000kg of dry cannabis to Canopy Growth.  The idea is to de-risk our business model.

In Canada, we also plan to grow the Sunniva brand through our specialty cannabis clinics, where we have about 95,000 patients registered with Health Canada.  And as that number builds we expect that some of those patients will be taking a Sunniva-branded product.  We are primarily focused on the medicinal market.

Importantly, our facilities meet GMP (Good Manufacturing Practice) standards, so we will be producing pharmaceutical-grade products.

Can you give us timelines to production on each side of the border?

We’ll start commercial production in California probably in the third quarter of 2018, which means we have the potential to harvest our first crop by year-end.  After that we scale up the facility over a period of about eight or nine months.  By the end of 2019, we should be in full production on our initial Phase 1 in California, that will produce about 60,000kg.  And I’d see us starting on Phase 2 almost immediately after Phase 1 is completed.

In Canada, we are just breaking ground right now, and construction is expected to take eight months.  At the earliest, production will start in the first quarter of 2019.  And similarly, it would take eight or nine months to get to full scale.  My estimate is that Canada reaches full production in 2020.

Take us back to your initial decision to produce in the United States and how you first recognized the opportunity.  What has been required to develop the business to its current status?

In California we saw a very large opportunity and we travelled throughout the state looking at lots of facilities.  Our conclusion was that California was about five years behind Canada.  It is a very fragmented industry with many small growers, lots of dispensaries, and, at that time, no regulation.

We realized that regulation would be coming, both legalization for adult use as well as medicinal cannabis.

This meant a couple of things.  The first is that quality of product would become important, and the second was that there would be a scarcity of safe products that would meet California laws once they were enacted.  That is why we decided to build this 500,000 square foot high-technology facility for growing cannabis.

Things have been moving along quite quickly.  We now have all of our temporary licenses in California that allow us to be compliant with California law.  And recently you saw that the Trump administration is basically saying that they will let the states regulate their use of cannabis and the federal government will not interfere with that as long as they are not breaking federal laws through such activities as exporting across state lines.

Looking ahead we are preparing for what is called annual licensing.  At the end of the day you need annual licensing to be compliant in California.  The state decided it would be a two-step process.  It would start with temporary licensing so they could get compliant production and sales going.  A lot of people have not done that, so they are going to be offside with California laws.

You are going big into production in both the US and Canada, and the countries have two very different operating environments.  Can you give us some insight into those differences?

In the US, everything has to be done within the state – you cannot ship product out of state, you cannot export it to other countries.  You have to grow and sell everything right in California, in our case, and the other states are like that as well.

In Canada, you can ship your product across the country, and if it is GMP-compliant you can ship it to the European Union.  The other difference is that in Canada there is clear delineation between medical use and adult use.  Licensed producers can deal directly with medical patients, whereas adult-use will go through provincial authorities and they will regulate provincially.

Can you walk us through the business components generating your revenue right now?

Currently, our revenue comes from two areas.  One is our device company, FSD.  They produce vaporizers and cartridges.  Smoking of cannabis is becoming less common and use of vaporizers and other devices is becoming more common.  And our entry into this business was strategic, as we saw it being more valuable once we are producing cannabis ourselves.

The business currently sells empty devices to a variety of brands across the US.  It is a relatively low-margin business, but it is profitable and brings us significant revenue.

The real opportunity for us is that once we are producing our own oils and other products, we can go to the customer and offer not only to sell the cartridge and pens, but a loaded cartridge with the component of oil you want.  If someone wants a high-THC oil we can do that, or if they want pure-CBD oil we can do that.  The high value part of the business is filling the device, packaging it and then giving it to the brand.

That was our strategy right from the start.  What’s happening in California is that a lot of the brands just want to be marketers and sellers, but they need a reliable source of flower, oils and devices.  We fit that niche for them.

The other component of our cash flows are natural health services, which have seven clinics across Canada.  We have doctors, nurses and highly educated helpers who take care of patients when they come to our clinics.  The doctor will make recommendations, we educate the patient, and then we connect with a licensed producer from which they can buy their cannabis.

The business generates healthy revenue already, and we generate revenue through licensed producers – we have 25 signed up to our software package.  We get paid based on their use of the software.  It allows the doctor and our clinic to communicate directly to the producer, so patients can literally get their delivery a day later.  It automates the whole ordering system.

And when we are in production, some of those patients will be using Sunniva-branded products.

Let’s look at the financial market side of things.  How are investors and financial professionals reacting to your story?

What we hear from analysts is they like the approach of de-risking the business by forward-selling the product.  The question in investors’ eyes is that it is great companies can produce cannabis and dry product and oil, but can they sell it?  Where is the market going in terms of pricing?

Our view is that if we can lock in some pricing on the sale of a majority of our production, it safeguards the whole business strategy.

The fact we are selling pharmaceutical-grade product also means we can sell it in Canada, or we can sell it internationally.  And the fact that we are a grower at scale of high-quality cannabis, that’s what people like.

Can you tell us what your competitive advantages are beyond the strategy you have laid out so far?

Sophisticated management.  My background is from the pharmaceutical industry.  I was a founder of a company called ID Biomedical and that was purchased by Glaxo Smith Kline for a total of about $2 billion.

We built one of the largest flu vaccine manufacturing facilities in Quebec City.  We produced at low cost, high quality and at scale.  We could then go to the big distributors and ask them how much they wanted.  We pre-sold about 40 million doses in the US and supplied about 75% of the Canadian marketplace.

We have those types of people in our company who went through that.  Similarly, our CFO was the finance person for Lululemon as it went from $150 million in sales to $1.5 billion in sales and became a $12 billion market cap company.

One of our big advantages is that people look at our team and see that we have executed on a number of very significant companies, and expect that we should be able to do it again.

Are there any closing thoughts you would like to offer?

We have been judicious with raising capital.  We have been able to finance our facility in California through a large developer out of Los Angeles, Barker Pacific Group.  And that has enabled us to not have to raise that $50 million to build that facility.

Fully diluted we only have about 40 million shares outstanding, and I think our shareholders appreciate that we are very careful about issuing shares.  At some point we will issue more, but we are going to be careful because we don’t want to dilute our shareholders.

I also believe our shareholders appreciate that management and board members are significant owners in the company, too.  Shareholders see that we are invested and that we need to make this a success for ourselves as well, and then we can all succeed together.

Learn more about International Sunniva Inc. at https://www.sunniva.com/ and on the CSE website at http://thecse.com/en/listings/life-sciences/sunniva-inc.