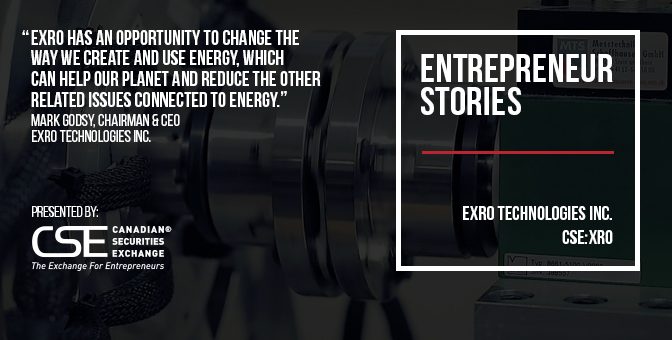 Exro Technologies Inc (CSE:XRO) has developed a technology to enhance an invention that has served mankind remarkably for more than 150 years.

Why is that important?

As Exro’s chairman and chief executive officer Mark Godsy explains, electric generators only work efficiently at a single speed, and “if they go too fast, it’s a challenge; if they go too slow, it’s also a challenge.”

For scores of years this has not been a problem because generators have used an energy source – coal, diesel, or gas – that allows the rotating part of the generator to remain at, and operate at, a consistent and optimum speed and torque, but the increasing push towards renewable energy is changing the game.

Mother Nature may be bountiful, but she is not constant, and if you don’t believe it, think of those seemingly paradoxical reports of wind turbine generators shutting down because it is too windy.

“What we do at Exro is, very simply, bring Intelligence to a generator and an electric motor,” Godsy says.

So, what’s the big twist on the ancient technology?

The traditional generator works off a single configuration of coiled copper wires, whereas Exro’s does not.

“We isolate all of the coils. We then create circuits amongst them, driven by a computer that, depending on the speed and torque, will reconfigure the coils in the generator for exactly the right speed and torque, creating an efficient and “Intelligent” generator,” Godsy explains.

The technology was invented by Jonathan Ritchey, Exro’s founder and its chief scientist and designer.

“The problem does not apply only for renewables,” Ritchey declares.

Take electric motors. These are essentially the flip-side of electric generators, and the same conundrum applies: getting the motor to work at maximum efficiency at variable rotational speeds.

“These are the technical issues that Exro is addressing,” Ritchey asserts.

Ritchey sees a lot of applications for Exro’s technology in the high-profile sector of electric and electric-hybrid vehicles.

“Put in our technology and it will allow you to have a situation where we not only gather more electricity when you are braking but that electricity does more for you when you are converting it back into mechanical energy,” Ritchey says.

The potential breadth of applications for the technology is enormous, but initially, Exro is targeting proof of concept in wind energy, unmanned aerial vehicles (drones) and electric/hybrid vehicles starting with electric bicycles.

The company has built three prototypes to prove its technology’s viability and is now focusing on early market opportunities.

In a capital-intensive, low-margin business, those sorts of efficiency improvements are sure to make wind farm operators sit up and take notice. Exro’s technology can also be used to retrofit existing wind turbines.

As for drones, these will become more efficient, paving the way for smaller drones or bigger payloads, and potentially longer flying times.

Exro has already signed a development agreement with a leading supplier of propulsion systems for drones and is working towards validating the technology for this application.

As for electric/hybrid vehicles, reduced electricity consumption and greater power regeneration when braking could significantly reduce the range anxiety for drivers.

The name of the game for Exro is to prioritize near-term market opportunities with low execution risk.

A key aspect of this strategy calls for securing partnerships with leading companies who have their own design and manufacturing facilities and distribution channels.

Exro’s revenues will largely come from licensing fees and ongoing royalties, in return for allowing the use of its technology to be integrated into generators or electric motors.

“The reason for a licensing/royalty model is to achieve scale and create concurrent value for our shareholders. Our proprietary technology has the potential of creating intelligence in billions of electric rotating machines — be it in generators or electric motors. If we were to do an elevator a day just for the approximate 17 Western European countries, it would take us over 1,000 years,” Godsy explains.

“We need to work synergistically with parties in this space by working with them, not competing against them.

“We want to work with all companies that can benefit from our technology – not unlike Intel wants to provide processors to all computers versus creating its own computer brand and competing with them – working with companies is a much better long-term strategy since our technology is easily integrated into generators and motors,” he adds.

If that sounds like the semi-fabled “win-win” scenario, there’s actually a third “win” to be taken into consideration and that’s the environmental aspect.

It was one of the things that drew serial entrepreneur Godsy to Exro in the first place.

“I was attracted to Exro as I am concerned as much now about the health of our planet as I am about the health of people. Exro has an opportunity to change the way we create and use energy, which can help our planet and reduce the other related issues connected to energy. The win-win here also includes the opportunity to build value for our shareholders,” Godsy says.

Company founder Ritchey believes the drive to a clean power world will eventually come down to economics.

“So, if we’re able to make that economically viable now, it’s not a carrot and the whip; it’s not the subsidies, the tax credits; it’s because it is also the best financial decision.”

This story was originally published at www.proactiveinvestors.com on December 11, 2017 and featured in The CSE Quarterly.

Learn more about Exro Technologies Inc. at http://www.exro.com/ and on the CSE website at http://thecse.com/en/listings/technology/exro-technologies-inc.