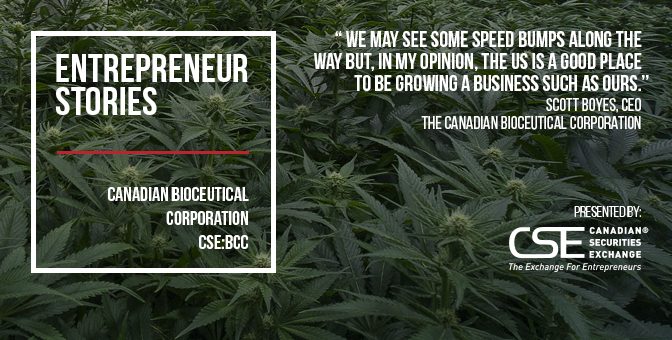 Technology companies often attribute their success to a strategic “pivot” that saw them de-emphasize an early business in favour of what ultimately proved to be a better idea.

The burgeoning cannabis sector now has its own example in the form of The Canadian Bioceutical Corporation (CSE:BCC), which shifted its focus to the United States after identifying cultivation opportunities it could advance much more quickly than its founding project in Canada.

Through a strategy of acquiring existing businesses and providing capital and management expertise to accelerate their growth, the company has positioned itself to be profitable early in its young life.

With its first acquisition, completed in January 2017, The Canadian Bioceutical Corporation acquired highly profitable assets in Arizona. These were only consolidated as of January 1, so their contribution to the company’s full financial year, which ended March 31, will be limited. Still, they will provide a good indication of what can be expected in coming quarters.

The Arizona assets are the first of several that chief executive officer Scott Boyes is working to bring under the company’s umbrella. The plan is to move quickly, setting up shop in states where risk is quantifiable and businesses are available at valuations that allow for multiple expansion as capacity is expanded on both the production and distribution fronts.

Unlike Canada, the US cannabis cultivation market is fragmented

“The market in the US is highly fragmented, characterized by a landscape with thousands of small producers,” explains Boyes. “This contrasts with Canada, which has a much more concentrated landscape with fewer but larger players.”

Boyes shares that the Arizona deal cost US$25mln, and was concluded at around 1.5 times revenue and 4 times cash flow, undeniably reasonable metrics for a business in the super-hot cannabis sector.

The Canadian Bioceutical Corporation gained more than just operating assets, as Boyes was eager to work with the executive who had built the Arizona business, Beth Stavola – so much so that Stavola is now president of the company’s US unit, CGX.

Purchasing the Arizona assets was an easy decision based on the results of extensive due diligence, which included an audit by a Canadian accounting firm and other assessments.

“The business checked every box,” says Boyes. “It was in a state where the regulatory authority is friendly. Also, when you obtain a license in Arizona you get seed-to-sale capability, with the right to operate a dispensary, to have one on-site cultivation, one off-site cultivation, run a full concentrates operation, and do your own packaging.”

Boyes explains that Arizona laws dictate medical cannabis operations must be owned by non-profit organizations, and therefore The Canadian Bioceutical Corporation does not cultivate or sell cannabis products itself in states with this type of legislation. Rather, the company purchased management, real estate leasing and other entities providing support to the licensed cultivation and retail operations under long-term services agreements. Because the owner of the license and facilities is a non-profit, the cash left over after operating costs flows to the service providers.

The company also holds another license that will enable it to open a third Arizona dispensary, which is currently in development. All three will operate under the Health for Life (H4L) banner and carry, among other products, the award-winning Multiple Extracts (MPX) brand Stavola established.

One final note on Arizona is that legalization for adult recreational use is off the table right now, following a November 2016 vote on Proposition 205, which proposed legalizing cannabis use for people 21 years of age and older. The “No” victory was far from overwhelming, with the vote decided by a margin of fewer than 3 percentage points.

After praising Arizona, the company is turning its focus to Massachusetts

The company’s second big acquisition of 2017 is taking place in a state where voting in November approved recreational use. In early April, The Canadian Bioceutical Corporation announced a Letter of Intent (LOI) to purchase a 51% stake in Massachusetts-based IMT LLC. The deal will take place via CGX using a services company structure similar to that employed in Arizona.

Assets include a 40,000 square foot facility zoned and licensed for cannabis cultivation and a license to open up to three medical cannabis dispensaries. Annual capacity is an impressive 2,500 kg of cannabis and 500,000 g of concentrates. The first dispensary, in the city of Fall River, will be adjacent to the cultivation facility.

The acquisition calls for a US$5.1mln cash payment to IMT LLC and a further US$2mln in capital to build the second and third dispensaries. Massachusetts could begin licensing dispensaries for recreational sales as early as January 2018, with preference given to medical-use locations already up and running.

In early May, The Canadian Bioceutical Corporation announced it is moving into a third market, as it is acquiring 100% of GreenMart of Nevada, a licensed cultivation and wholesaling business based in Las Vegas.

The growing facility is fully operational and can produce 1,600 kg of dried cannabis per year plus 85,000 g of concentrate. Total cost is US$19mln, payable half in units of the company and half as a non-interest bearing promissory note.

Boyes notes that while Nevada’s population is less than three million people, over 42 million tourists visit each year, so with voters having recently given the green light for recreational use the total market could be very large.

Completing over C$50mln in acquisitions during the first half of 2017 would be quite a feat, and a US$25mln line of credit the company secured in May will play an important role. It will also help to limit dilution; the company stated its intent in late March to raise US$20mln by issuing new shares but decided to raise less (the book was closed at US$11.2mln) because the line of credit can cover a substantial portion of near-term spending.

While Boyes says the Canadian cultivation license for its facility in Owen Sound, Ontario, is still something the company would like to obtain, the focus for now is definitely the US, where he says more acquisitions can be anticipated this year.

Boyes has been somewhat surprised that his company has not achieved the valuation multiples enjoyed by some other public cannabis issuers in Canada, but thinks this will correct itself over time as investors become more comfortable with businesses operating south of the border, where on a federal level the possession of cannabis remains illegal.

“There is a degree of concern about the political environment in the US, but the more you are involved down there the less you see it as a risk,” Boyes concludes. “Some states may need to tighten their regulations, but overall the industry is growing too quickly and simply creating too much employment and tax revenue. We may see some speed bumps along the way but, in my opinion, the US is a good place to be growing a business such as ours.”

This story was originally published at www.proactiveinvestors.com on May 8, 2017 and featured in The CSE Quarterly.

Learn more about Canadian Bioceutical Corporation at http://www.canadianbioceutical.com/ and on the CSE website at http://thecse.com/en/listings/diversified-industries/the-canadian-bioceutical-corporation.