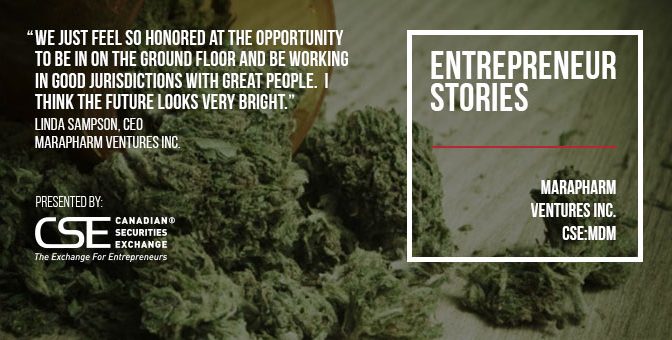 Getting in on the ground floor of an exciting new opportunity is one well-acknowledged path to success. Marapharm Ventures (CSE:MDM) CEO Linda Sampson likens it to finding a “once in a lifetime opportunity” and believes that is exactly what her company is moving forward with as it draws closer to operations at multiple facilities focusing on the medical cannabis industry.

Marapharm is taking a different approach than many of the other companies in the space, diversifying its portfolio across geographic regions and business types, and doing so in a way that marries its corporate strengths with the needs of different markets. It is a plan that at once helps manage risk while increasing the degree of success Marapharm and its shareholders can potentially realize.

Marapharm is advancing cannabis production opportunities in British Columbia and Nevada, and will also serve as landlord of a large facility in Washington State. It plans to not only grow cannabis but also process harvested material into products such as oils and edibles in jurisdictions where this is permitted. Production, processing, landowner, future retailer – put a check mark in the vertical integration box.

Fortunately, when it comes time to ship product, Marapharm’s boss is an experienced marketer. Sampson, originally from South Africa, enjoyed a career before agreeing to head Marapharm that saw her re-brand struggling companies and help turn their operations successful in relatively short order. Sampson also worked with commercial property developers to conceptualize projects, consult with designers to ensure details were right, and market them afterward.

Sampson’s skillset is being put to good use at Marapharm, which leans on her for real estate, market research, and strategic planning insight to name just a few challenging aspects of the fast-moving, big money industry that is medical cannabis in North America.

Marapharm has an application before Health Canada for a production facility in the picturesque city of Kelowna – also home to Marapharm’s head office – that has passed the Security Clearance phase and is now in the in-depth Review phase.

But moving faster thanks to different local rules are facilities in the US state of Nevada. Here, Marapharm is looking to be a major player in the Las Vegas market for medical, and soon recreational, cannabis and processed cannabis products.

“Marapharm owns a company called EcoNevada which holds a 204,000 square foot cultivation license and a 16,000 square foot processing license,” explains Sampson. “And at another Nevada project we own the land with no debt, have an option to purchase 85% of the production license for $250,000, and then can acquire the remaining 15% for $1,000,000. When you consider the three licenses together it totals about 304,000 square feet, which is the equivalent of six and a quarter football fields.”

The holder of the latter license is businessman Kurt Keating, an award winning organic cannabis grower who will work with Marapharm on its Nevada projects as general manager.

But Keating’s role does not end there. Being a Washington resident, Keating obtained a license in that state and will use it to operate a facility that would be situated on 13 acres of land Marapharm has the option to purchase. It already accommodates a 28,000 square foot building used as a cultivation facility and the plan is to expand that footprint.

Companies from outside of Washington State are not permitted to hold local growing licenses, and with Marapharm hailing from Canada that means it can’t be the licensed grower at the Washington site. The strategy is thus to purchase the land, build and outfit the facility, then lease it to Keating and other growers for their own production use. A departure compared to being the actual grower, but still a use of capital that generates a good return and diversifies both the company’s asset holdings and revenue model.

“Part of Kurt’s Washington license allows for unlimited processing,” says Sampson. “There is a building next to the production facility that we can turn into a processing center. We can equip it so as to maximize processing potential to be operated as a turnkey facility. For people who hold cultivation licenses but not processing licenses, we can allow cultivation on our property and then they can use the processing facility after harvests.”

Sampson says Nevada will be the company’s biggest cultivation center, as well as the one that receives the majority of the marketing budget. “The Nevada medical market is unusual in that it is a reciprocal state – if you are a medical cannabis user from another jurisdiction you can bring your card to Nevada and they will honor it,” explains Sampson. “Las Vegas gets 50 million visitors a year, and on November 9 the state voted to move forward with legalization, so that adds another aspect to the value of what we have there. I think our involvement in Nevada represents a giant step forward for our company.”

Looking out over the next 12 months, Marapharm intends to forge ahead with its application in Canada while completing the build-out at its Washington site.

In Nevada, the company wants to get production up and running sooner and use its processing facility to create edibles and other products suited to the local market. “We anticipate that the Nevada market will be more focused on processed products as opposed to the actual cannabis, as they can be used more discreetly,” says Sampson.

Reflecting the different regulatory atmosphere, the Nevada sites actually face April deadlines to begin operating, so Marapharm is working to have initial 5,000 square foot facilities functional on each within the prescribed time frame. “They are OK with us having a smaller building but with the intent to move ahead with a bigger structure at a later date,” Sampson says.

So, big plans and tight timelines, but how is Marapharm set to manage financially? To begin with, the Nevada land is paid for and the company does not have any debt, plus warrant exercises brought in over $1.5 million as the stock price topped the $2.00 level in November. The stock trades good volume between $1.00 and $2.00, which suggests the company has financing options that would not require it to accept undue dilution if it needed to go to market.

Marapharm also has designs on California, not to mention automated vending machines, that, using proprietary biometrics for identification purposes, would be used where regulations allow. It is a strategy of diversification, integration, but focus on a young, growing cannabis industry – the pieces appear to fit.

“It is not often a chance like this comes along – it is kind of like the gold rush,” Sampson concludes. “We just feel so honored at the opportunity to be in on the ground floor and be working in good jurisdictions with great people. I think the future looks very bright.”

This story was originally published at www.proactiveinvestors.com on Feb 23, 2017 and featured in The CSE Quarterly.