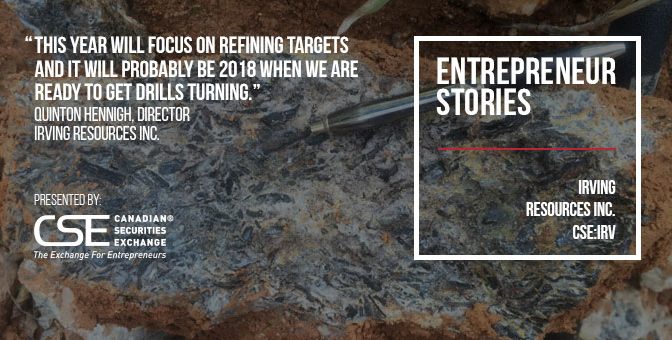 When one thinks of Japan, sushi, Shinkansen bullet trains and onsen hot spring resorts come to mind more readily for 99.9% of the population than precious metals exploration. But those famous hot springs are plentiful because of geothermal activity, and this special geological phenomenon in Japan has given rise to some rich gold mines in years past.

The most impressive example in modern times is the Hishikari mine located on the southern island of Kyushu. Operated by Sumitomo Metal Mining Co. Ltd. (Tokyo Stock Exchange:5713), Hishikari is very high-grade in nature, averaging some 40 grams per ton of gold in its ore.

Quinton Hennigh and Akiko Levinson knew about the potential for exploration in Japan as they were building up ounces at the Springpole deposit in Ontario while running Gold Canyon Resources. Springpole developed into a resource of over 5 million ounces of gold before the company was acquired by First Mining Finance in 2015.

As part of the deal, Gold Canyon spun out a new company with Levinson at the helm. She and Hennigh had for years agreed that if they ever started a new company, it would focus on Japan. The new vehicle was their chance and Irving Resources (CSE:IRV) had its direction laid out from the get go.

As 2017 kicks off, Irving has a project portfolio with all the hallmarks investors like to see – multiple projects with high-grade gold and silver showings, sound infrastructure, and a friendly jurisdiction to work in. Combine these attributes with good share structure and a healthy treasury and the Irving story has become an investor favourite, its stock price rising over 600% in the past 12 months to around $0.90.

In November 2016, Irving raised just short of $6 million, with famed precious metals investor Eric Sprott personally providing the lead order. That leaves the company with over $7 million in the treasury, or to put it another way, all the financial runway it needs for well over a year to begin showing the world how rewarding precious metals exploration in Japan can be.

“We are one of very few exploration companies operating in Japan,” explains Hennigh. “We are building relationships in the country and it is a very pleasant place to work.”

Irving, though a local subsidiary, has thus far acquired three projects, all located on Japan’s northernmost island of Hokkaido. Each of the projects holds great promise from an exploration standpoint, but Omui is the one that excites Hennigh most at this early stage, and with good reason.

Chip sampling off float boulders on the property returned assay numbers the company termed “exceptional”. The assays included samples of 480 grams per tonne (g/t) gold and 9,660 g/t silver, 143.5 g/t gold and 2,090 g/t silver, and others of similar quality. Even the newcomer to investing in precious metals will recognize those grades as being virtually off the charts.

“Omui is a very high-grade epithermal vein system exposed at surface and there was limited mining there in the 1920s,” explains Hennigh. “We expanded our land position by filing for applications for additional tenements, and have also started to prospect beyond the historic Omui mining area.”

Importantly, the exploration team has also found Omui’s rock to contain silica, a common element accompanying veined precious metal deposits, and critical to ore processing in Japan. The early results indicate rock at Omui being very low in toxic elements such as arsenic and antimony as well, suggesting any deposit outlined at the project could yield ideal smelter feed for domestic refineries.

While Hennigh and Levinson will be spending quite a bit of time in Japan going forward, when not there they have teammates to rely on in the country who are second to none.

Irving also considers itself fortunate to be working with Haruo Harada and Mitsui Mineral Development Engineering Co., Ltd. (MINDECO) for assistance with permitting applications and other work with specific engineering requirements.

Dr. Kuang Ine Lu, an Irving Resources director who earned a Ph. D in Economic Geology from the University of Tokyo, brings yet another experienced hand to evaluate projects and strategy based on years of local experience.

Longer term, the plan at Irving is to prove up deposits from which to sell smelter feed to domestic smelters.

Hennigh is quick to point out, though, that the company intends to move ahead in a methodical manner, so as to make the most of its financial resources and ensure the highest possible likelihood of ultimate success.

“We are looking to shore up our land positions in the next few months and then starting in May begin field work on the various projects,” says Hennigh. “Omui will be first, as it is our most advanced project and is giving us the best numbers. But we will explore Utanobori, Rubeshibe and possibly other projects we are considering with chip sampling, mapping, soil sampling and maybe some geophysics. This year will focus on refining targets and it will probably be 2018 when we are ready to get drills turning.”

Interestingly, Hennigh says that experienced drill teams are available in Japan not only owing to mineral exploration but also because resorts and energy projects drill to tap hot springs throughout the country. They use core drills primarily, which is exactly what Irving wants so that it can preserve layers of rock and assess veining at various depths in detail.

Shareholders will be happy to learn that the depths Irving envisions its targets at are not that daunting, with Hishikari’s deepest levels of 350m serving us a good indicator for a Japanese precious metals deposit.

And because of Japan’s size and advanced development, project accessibility is not an issue. “Most areas in Japan are accessible by road and we don’t have to walk more than half a kilometer to any of the sites,” says Hennigh.

The stars seem aligned to make 2017 an exciting year for Hennigh, Levinson and the rest of the Irving Resources team. With field work starting in a few months and early project showings nothing short of outstanding, the company is set to draw attention to a country whose potential for precious metals exploration has largely been overlooked.

This story was originally published at www.proactiveinvestors.com on Feb 27, 2017 and featured in The CSE Quarterly.

Learn more about Irving Resources Inc. at https://www.irvresources.com/ and on the CSE website at http://thecse.com/en/listings/mining/irving-resources-inc.