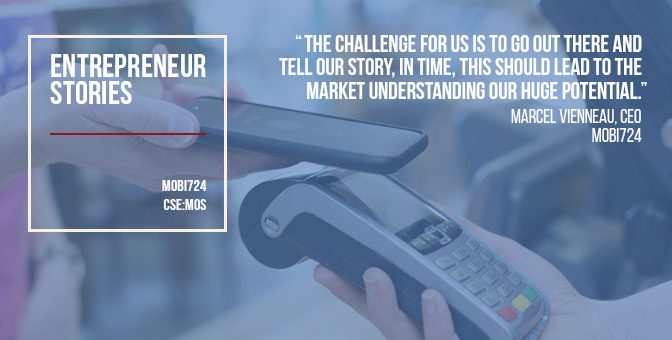 We all know that shopping isn’t what it used to be since the arrival of smartphones and e-commerce.

What you might not be aware of is that the payments, promotions and coupon landscape is also undergoing a seismic shift due to emerging technology.

At the vanguard of this revolution is rapidly growing fintech (financial technology) company MOBI724 Global Solutions Inc. (CSE:MOS), which provides consumer services that weren’t available as recently as two years ago and is participating in an expanding global market that this year has an estimated worth of $10 billion.

The company specialises in card payments and its core business, explained Chief Executive Officer Marcel Vienneau, is its card-linked platform, which when combined with digital marketing represents a new ecosystem allowing banks, merchants and customers to transact more efficiently with each other.

Card-linked technology is transformative for credit card points programs, and in addition enables card users to receive a tailored stream of offers and promotions on their smart devices.

To give a sense of scale, the company’s website says there will be just over 1 billion mobile coupon users by 2019, up from just under 560 million this year.

“This type of technology simply didn’t exist two years ago,” said Vienneau. “We are selling our solutions primarily to card issuers or banks in different countries,” he adds, pointing out that the company has customers in Canada, Asia Pacific and Latin America. In the Canadian market alone it has 400 customers.

“Most banks, anywhere in the world, have points programs where they issue points when you spend with their cards. Most of these cards enable customers to redeem points and get a reward,” he said.

Perhaps the most significant aspect of MOBI724’s technology is that it has reinvented a clumsy, 20-year-old cost and payment structure, and thereby helps banks to make more money from card transactions.

Vienneau offers some examples of how the system worked in the past and how MOBI724’s better approach makes a difference.

A credit card customer has been awarded 25,000 points for using his or her card and can therefore buy a product with a $250 gift card. The card-issuing bank bears the cost of producing a rewards catalogue and the shipping costs of any product bought.

Now, say that a customer goes to an actual store and wants to buy a gift for $400 and include the $250 gift card value as partial payment. The current system is disjointed and the balance can be made up from cash, or another credit card, which might not be linked to the points system. Obviously, the customer doesn’t get the benefit of gaining more points.

MOBI724 simplifies the process by bringing all the strands together. It links the credit card, which issued the points, with the gift card. A customer can make a payment with an app and it both acknowledges that the gift card has been used and applies the balance owing to the credit card that earns points.

Similarly, when someone is in a store MOBI724 can send a coupon based on location or the customer’s profile, then the coupon can be used moments later at the cash register. The system can also send offers directly to a smartphone at any time, regardless of whether the shopper happens to be at a store or not.

In the preceding case of the $400 purchase, the bank charges a percentage of the transaction value when the points are redeemed, and so does MOBI724. The bank also wins by avoiding the necessity of having to pay for catalogues and product shipping.

“This is a new way to transfer a cost structure into a revenue-driven model, and it is seamless for the user and the bank,” said Vienneau.

It also taps into the way people engage with their banks and financial institutions nowadays – namely, instead of going into branches and using ATMs, people are putting “plastic into phones” and want more personalised interaction.

“Banks are losing their branding abilities but this gives them more channel opportunities,” Vienneau explained.

MOBI724 has invested considerably in its “business intelligence” capabilities, which allow it to map out people’s past purchases, social media interests and other distinguishing characteristics so that it can target them with specific coupons and offers.

“We are not just throwing everything at them,” said Vienneau.

The digital marketing aspect of MOBI724’s technology should also be of interest to advertisers, he points out, as it reveals consumer spending habits and other tendencies.

To that end, the company has struck strategic alliances with several agencies to help further grow the business.

Vienneau, a tech entrepreneur who became Chief Executive Officer when the group listed on the Canadian Securities Exchange in February 2015, expects to double revenue in 2017, along with crossing the line into positive EBITDA territory around mid-year.

In the next 36 months, the aim is to have $50 million in annual revenue and an expanding sales pipeline.

Vienneau designed the card-linked technology himself, planning the concept on a single sheet of paper four years ago.

The digital coupon market is projected to be worth $50 billion in the next three years and he reckons MOBI724 is well positioned to win a meaningful piece of this.

The group already has a respected backer in the form of institutional investor Fidelity, which has been involved in four rounds of funding, the latest for a $1.5 million convertible debenture.

MOBI724 announced plans to raise $5 million in July, around half of which has already been obtained. The money will be used to drive growth, as the research and development phase is over and the various technology solutions are fully functional.

Significantly, MOBI724 owns all the intellectual property supporting its platform and has a patent pending.

Vienneau reckons that at a market cap of approximately $5 million, or around twice projected 2016 revenue, the share price offers good value to new investors. “The challenge for us is to go out there and tell our story,” he said. “In time, this should lead to the market understanding our huge potential.”

This story was originally published at www.proactiveinvestors.com on Nov 24, 2016 and featured in The CSE Quarterly.

Learn more about Mobi724 Global Solutions Inc. at http://www.mobi724.com/ and on the CSE website at http://thecse.com/en/listings/technology/mobi724-global-solutions-inc.