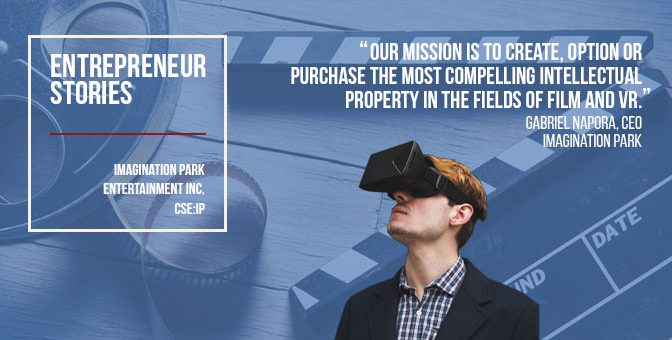 In a world where corporations with big budgets toil night and day to eke out what often are mere single-digit profit margins, the idea of a company making modest, low-risk investments and generating swift returns of 1,000% or more seems fanciful. Such a company would have to operate in an innovative industry facing serious capacity constraints, and be one of the few groups holding the keys that unlock the potential to address them.

Well, meet Imagination Park (CSE:IP), a young company that actually is on such a path, working in a realm that over time is likely to touch each and every one of our lives…virtual reality (VR).

Imagination Park is home to a multi-talented team whose members have sold feature films, concepts, scripts and intellectual property to some of the largest entertainment studios in the world. It is a company that seems to have the business side of the industry figured out, pursuing a model that provides multiple chances to make exceptional returns while limiting financial risk to a minimum.

How do they do it? They follow the money.

“I am a film producer by trade and learned early on that the best money in film is not made in production or finance, but in intellectual property,” says Gabriel Napora, Imagination Park’s Chief Executive Officer. “Our mission is to create, option or purchase the most compelling intellectual property in the fields of film and VR.”

More on virtual reality in a moment, but to illustrate the power of ideas in the entertainment industry, consider a story Napora tells about one of his many successful projects. “Early in my career, I produced a project called Tetravaal with a young director on a budget of about $4,000. Tetravaal won the attention of the right people and ended up being the precursor to Chappie, which had a budget of around $70 million. But it all grew from an idea that originally cost only a few thousand dollars to produce.”

Imagination Park brings substantial heft to its projects thanks to a team whose members include two highly successful producers — Napora, plus Imagination Park President Tim Marlowe who was the Executive Producer for The Lady in Number 6, which won an Academy Award. Colin Wiebe, a creative entrepreneur, digital marketing expert and musician who toured with the likes of rock legend Randy Bachman chairs the board of directors, which also includes producer and ace talent scout Yas Taalat. The top execs oversee a technical group on the special effects and virtual reality fronts that is second to none. This is a company ready to leverage technical and cost advantages to compete in a large and rapidly growing market for the products and services in which it specializes with an emphasis on 360 degree, 3D virtual reality content.

“Netflix had a budget of around $6 billion last year, you can expect Amazon to match that or be higher, and HBO will have to do the same,” explains Wiebe. “With more and more people binge-watching on Netflix content gets consumed very quickly, so studios have to both be shooting around the clock plus looking outside their walls. But the fact is that there are only so many quality content producers around and only so many production facilities.”

Imagination Park takes advantage of this growing supply/demand imbalance not only by producing films and other content, but also with virtual reality services and more conventional production support.

It does this in a clever way from a financial perspective, structuring agreements so they pay on both the front and back ends. “In film, and to some degree virtual reality, the riskiest thing is financing. No matter how smart you are, nobody can guarantee that a film is going to make money,” says Napora.

“When we create, option or license intellectual property to present to major studios there is always an upfront fee paid by the studio before we go into production. In most cases, we also earn producer fees to move things forward. By the time the film goes into the world we have already made an exponential return, and if the film is successful we’ll make even more. So, our model is significantly less risky than one involved in actually financing films.”

In the next few months the world will get to see a series of Imagination Park projects, including a full-length feature film starring Danny Trejo, several virtual reality pieces, and a full-length documentary. “We are close to having around 18 projects either created, optioned or acquired on our basic slate for 2017,” says Wiebe.

A proof of concept is like a mini-trailer, but the intended audience is a studio or other entity who would purchase or financially support the idea. Imagination Park creates proof of concept packages for third-party filmmakers as well as for itself to market its own concepts developed internally. Napora’s Tetravaal production was a proof of concept.

“Looking back, I have been able to sell about 50% of the projects I have been involved in to major studios,” says Napora. “I am not saying we will sell half of everything we are involved in going forward, but even if we were to sell three or four we would be a very well-to-do company. If we are right on two or three projects and they turn into hits, we become a major Hollywood player.”

On the virtual reality side, Imagination Park has created content soon to be for sale in virtual reality stores. It will also work with advertising agencies, and with film studios that have a new title ready to go but need virtual reality content online to help excite potential moviegoers.

“Sales of virtual reality equipment have exceeded $1 billion and this is not even the beginning of the curve,” says Wiebe. “We are currently in discussions with some major corporations focused strictly on advertising. We have detailed proposals going out to major companies and see this as being the very start of something that will spark a huge wave of virtual reality service work for us.”

The modest investment philosophy extends to all corners of the company, with the chairman saying it is important to stay lean and mean. “Nobody is getting big salaries. Everything is performance-based and we have specific budgets for travel and projects.”

Virtual reality, proofs of concept, feature films and production work are enough to keep the Imagination Park team busy on its North American home turf, but China beckons as well. The Asian country is a huge and rapidly expanding market for feature films, and Napora happens to have both experience and connections there, plus an understanding of the types of concepts that sell to its unique audience.

“There are opportunities now that never existed in the past and they are there for the taking if you know the right people, have the right product, and have a team that can execute,” says Wiebe. “It is like mining for movies. But ours is a mining project where you know in advance that the value is there. All you have to do is go and get it. The skyrocketing virtual reality trend has been an added surprise discovery that luckily we’ve been way ahead of. ”

This story was originally published at www.proactiveinvestors.com on Nov 24, 2016 and featured in The CSE Quarterly.

Learn more about Imagination Park Entertainment Inc. at http://imaginationpark.com/ and on the CSE website at http://thecse.com/en/listings/diversified-industries/imagination-park-entertainment-inc.