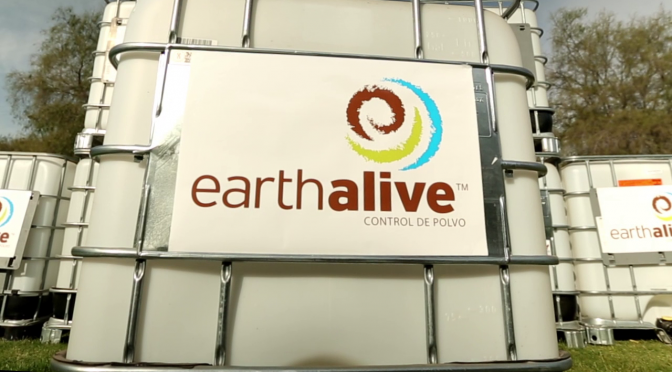 This story was originally published at www.proactiveinvestors.com on February 29, 2016 and featured in The CSE Quarterly.

Listening to David Gilmour speak about the development of his company, Earth Alive Clean Technologies (CSE:EAC), is nothing if not inspiring.  His is an approach in which shortcuts are neither sought nor tolerated – do things right, or don’t do them at all.

By the sounds of it, that commitment to doing things the proper way is about to start paying off.  And not just on a single flagship product front but two, both with potential, as Gilmour puts it, “to grow into $100 million businesses.”

Earth Alive uses a fascinating set of technologies that rely on specifically selected microbial strains to create products for two very different industries: agriculture and mining.  Among the important outcomes is better soil health and consistency, both for agricultural operations that need stronger soils to cultivate healthier crops, and for mining operations where dust contamination from dry and loose soils is a constant problem affecting production and profitability, health and safety, and the environment.

These are not new challenges the company is addressing.  On the agriculture side, environmentally sustainable fertilization and irrigation are necessities of which we are all aware. Organic agricultural production and consumption is growing rapidly, and the company’s unique biofertilizer technology is ready to help growers meet demand for their products.

On the mining side, dust suppression is typically controlled with chemical treatments and huge amounts of water – sometimes millions of litres per day at a single mine site.  Needless to say, such solutions are costly not only in financial terms but also in their impact on the environment. The company’s proprietary EA1 dust control technology is positioned to help mining companies worldwide better their dust control practices.

Earth Alive in its current form began five years ago when Gilmour, who is both the company’s founder and CEO, took over a research and development company that was following a mandate to develop low-cost, high-performance fertilizers that were also environmentally sustainable.

One of the first things he realized was that while the company had great products, as well as the patents to back them up, agriculture is a market where people are set in their ways and products are heavily regulated.  The company would need to seek government certification before going much further.  Time to pivot…if only temporarily.

“We soon identified an opportunity to develop a high-performance, organic dust control product for a client involved in a huge mining project in Latin America where the use of chemicals and water was being constrained in a big way,” explains Gilmour.  “That put us on the map.”

But while replacing magnesium chloride and petroleum derivatives or obviating the use of extraordinary amounts of water is a noble goal, Gilmour and his team are realists.  “There are three characteristics we kept in mind at all times, “says Gilmour.  “One, it has to work well or better than the chemicals we replace, two, it has to be economically viable to use for the client, and three, it has to be environmentally sustainable.  Green technologies are great, but if they don’t work just as well as the chemicals they are designed to replace and cost more to use, nobody will adopt them.  Those three characteristics form the basis of our product development.”

Marketing was difficult when Earth Alive first started reaching out to potential users.  “We got to the market one company at a time, which for a small company like ours is very laborious.  When we announced the Brenntag agreement just before Christmas, it was the launch pad for broader distribution.  Now we are talking to every major mining company in the world, and a lot of that reflects Brenntag and their network of relationships in the mining sector.”

The agreement Gilmour refers to is with Brenntag Latin America, a subsidiary of Brenntag AG, the world’s leading distributor of chemical products.  Put simply, Brenntag knows everyone and sells them lots of products.  It is one of the most powerful allies Earth Alive could have aligned itself with.

As EA1 dust suppressant took off, the company was busy in the background completing its main agricultural product, Soil Activator, which uses microbial strains that each have a particular influence on soil and the growth cycle of plants.

One of the key strengths of Soil Activator is that it is not crop-specific.  “Soil Activator is efficient on everything from wheat to arugula, from tomatoes to bananas,” says Gilmour.   “It works well on its own for organic agriculture, but can also be utilized in tandem with traditional chemical fertilizers to better their performance and enhance absorption by plants.”

Underlying the impressive efficacy of Soil Activator is a return-to-the-basics approach to fertilization.

“The product utilizes different micro-organisms and a proprietary synergistic active,” explains Michael Warren, Vice President of Global Operations, Agriculture Solutions.  “We identified and use unique strains that are able to fixate nitrogen, solubilize phosphorus and chelate iron, among other benefits. These are actions that very few biofertilizers can achieve.

“There is often a whole host of nutrients already present in soil that plants just don’t have the ability to absorb.  Soil Activator will render these nutrients and make them available to plants.”

As with EA1 dust suppressant, Earth Alive has found a ready distribution partner for its biofertilizer in Brenntag, announcing a separate agreement for the exclusive distribution of Soil Activator with its Latin American subsidiary in February.

With the Brenntag sales and distribution network in 16 Latin American countries set to augment existing business in a big way, Gilmour is looking for Earth Alive to turn profitable later this year.  “We built the company in a way that our overhead is low, and now the whole production, distribution and sales chain is aligned with our partners.  All those years of preparing the business model and getting it to execution — the table is set,” says Gilmour.

“We have passed the developmental stage and are now onto full commercialization,” he continues.  “I really have to thank our shareholders for their support and patience.  They know that we are always progressing and always working to deliver on the business plan we put forth.  We could not have skipped the steps we took the past three years and still brought our technologies to market successfully.  But the result is that our technologies are now real players out there on the international market.”

Learn more about Earth Alive at http://earthalivect.com/ and on the CSE website at http://thecse.com/en/listings/technology/earth-alive-clean-technologies-inc