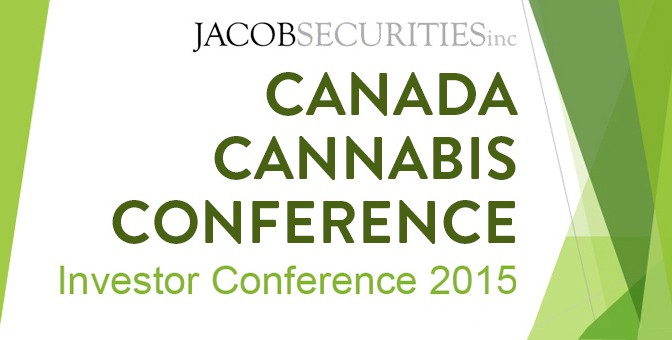 Venturing into uncharted territory is not for the faint of heart. For many entrepreneurs and investors in the fledgling medical marijuana sector, however, uncharted territory is something everyone seems to be taking in stride. Earlier this month, Jacob Securities organized their first Canada Cannabis Conference, an event that brought together numerous business and thought leaders from across the commercial cannabis space.

One of the key reasons for holding this conference was to bring together many key players and evaluate the licensing process within Canada as well as some of the early lessons from the initial licensees.

While the conference was modest in size, owing in part to the fact that it was an ‘invite only’ event, there was nonetheless strong interest for most of the sessions – with some being standing room only.

Attendees ranged from international accredited and institutional investors to representatives from strategic industry groups, most notably insurance and pharmacy owners. Overall, there was a definite sense that the investing climate for medical marijuana companies is considerably different this year compared to last.

In fact, one of the defining characteristics of the medical marijuana industry is just how quickly it is maturing. According to Jacob Securities analyst Khurram Malik the sector is evolving “faster than anything I’ve seen.”

According to data from Health Canada, there are 25 licensed producers and, as of March 31st there have been 1284 applications received with 324 of those applications currently in process. According to Malik, with the first cohort of licensed producers beginning to see revenues start to come in, more supply is reaching the market, and with more on its way investors and analysts will begin to have a clearer picture of how to value companies in this space based on supply/demand dynamics.

The CSE has also witnessed a rapid and sizeable interest in this growing sector. CSE CEO Richard Carleton had the following observation about where the Cannabis sector is heading and why so many firms are looking to the Canadian market to list:

“Canada has emerged as the clear source of public finance to the emerging industry in its various guises. With relatively fewer complexities to navigate, US domiciled companies are looking to Canadian corporate finance firms for access to public equity raised through an exchange listing in Canada. Increasingly, the exchange of choice is the CSE.  Not only do we have more than 30 companies in the space in some way, we have a number of large deals in the pipeline, many of them from the US.”

Even so, there are still signs of an industry in flux. Just this past month alone there were three blockbuster announcements around the space.

First, there was a historic decision by the Supreme Court of Canada to allow for sale/distribution of edible marijuana products and then came the news of a major merger deal between two important players in the space: Tweed Marijuana Inc. and Bedrocan Cannabis Corp. And, in Vancouver, the city just passed a by-law regulating where medical marijuana dispensaries may locate.

As the industry continues to evolve, attitudes are also changing towards medical marijuana use. One of the key observations from the Canada Cannabis Conference was the attendance and interest from both the insurance industry as well as from pharmacist groups who, for the most part, have been observing from the sidelines.

While the ‘heady’ days of last spring are behind us, the prospects for the medical marijuana space as a whole appear promising. This highly dynamic space still has many questions to answer and regulatory bridges to cross before becoming a well-established treatment option.

Overall, feedback on Jacob Securities’ initial Canada Cannabis Conference was  very positive. With a diverse range of market participants, both local and international, as well as in-depth coverage of the medical marijuana landscape, this conference provided a fascinating window into a space many are eager to see grow.